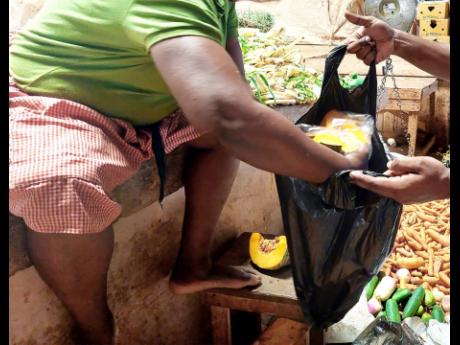 Corey Robinson
Nearly three years after the ban, the prohibited scandal bags are still widely used in the commercial space, with some stakeholders pointing to a plethora of legislative loopholes – among them an increase in the size of the bags.

An analysis of three single-use plastic bags submitted to the Bureau of Standards Jamaica (BSJ) as part of a probe into the Government’s plastic ban has confirmed that the items still on the market are indeed in contravention of the law.

The three bags of varying sizes were purchased in downtown Kingston a month ago, and were sent to the BSJ for evaluation of their dimensions, as well as their chemical components.

In 2018, the Government announced a policy to implement a ban on the manufacturing, importation, distribution and use of certain single-use plastic bags, commonly called ‘scandals’; plastic drinking straws; and expanded polystyrene foam products, in three phases, starting January 1, 2019.

Since 2021, scandal bags measuring less than 24x24 inches or less than 1.2 millimetres in thickness and those found to be made in part or wholly of polyethylene or polypropylene were deemed illegal for Jamaicans to use or sell.

At the time, Jamaica was estimated to have one of the highest per capita usage of plastic bags in the world, with the average person using 500 yearly. Styrofoam and plastics take an inordinately long period to degrade, and both materials comprise approximately 50 per cent of the non-biodegradable waste generated locally.

All three scandal bag samples purchased by The Sunday Gleaner were found to be in violation of the ban, following the dimension and burn tests.

As part of the burn test, in particular, the samples were exposed to a series of organic solvents, including acetone, chloroform and Xylene. Researchers said that in all cases, they were found to be insoluble – incapable of being dissolved.

“In the burn test, the samples were compared to a known reference of a polyethylene, the burn characteristics of samples that are known to be polyethylene,” explained Dr Dwight Ramdon, director of science and technology at the BSJ.

“You will see that the burn results of the test samples are very comparable to that of polyethylene. It burns by itself with a yellow flame. It melts, it drips, and it leaves an ash. So that supports the argument that these three samples are polyethylene.”

Ramdon said that there were other “stabilising” components in the samples provided, but for the most part, polyethylene was the most distinct.

“The dimension tests are saying that if these bags are plastic, they do not meet the requirements of the trade order based on the dimensions,” the scientist noted.

Nearly three years after the ban, the prohibited items are still widely used in the commercial space, with some stakeholders pointing to a plethora of legislative loopholes – among them an increase in the size of the bags.

On Friday, head of the Jamaica Environment Trust (JET), Theresa Rodriguez Moodie, said that while the ban has worked in reducing plastic bag usage generally, there remains concerns due to its affordability among the public.

She said the test results are further confirmation of lax monitoring on the part of the authorities.

“The monitoring enforcement needs improvement. While the ban has had an impact and there has been a reduction of plastic bags, the fact that you are finding it still is saying there needs to be more work on monitoring and enforcing the ban,” she posited.

“There needs to be the educational component of ensuring that people understand why they shouldn’t be using plastic bags but also to make sure they have alternatives available. The alternatives are very important. If the alternatives are not cheaply and readily affordable, then people will always want to use plastics.

Reusable shopping bags cost from $50 up per bag, dependent on size and type.

Last month, The Sunday Gleaner managed to purchase scandal bags from several vendors and wholesales in a number of parishes.

At the Coronation Market in Kingston, two plastic bags were sold for $50, while at the wholesales, the bags were being sold for up to $500 per pack.

Some market vendors argued that they purchase the scandal bags to give to their customers when they buy goods.

According to the authorities, more than 40 persons were charged for breaches of the Natural Resources Conservation Authority (Plastic Packaging Materials Prohibition) Order.

The National Environment and Planning Agency (NEPA) said those breaches involved “persons or entities using and/or distributing single-use plastic bags that are 610mm x 610mm and 1.2mm in thickness and/or drinking straws made wholly or in part of polyethylene or polypropylene manufactured for single use.”

In the meantime, the Jamaica Manufacturers and Exporters Association (JMEA) said its members are yet to receive promised compensation from the Government for banned products they had in stock when the regulations took effect.

According to the JMEA, initially the compensation cost was just over $53 million; however, an audit conducted by NEPA on the banned inventoried items from October to November 2020 resulted in the figure being revised. The JMEA last week said it had not yet received this updated figure.

The Government has promised to expand the plastic ban this year. However, the JMEA pointed out that imports of plastic boxes and similar products for the conveyance or packaging of goods increased from US$5.12 million in 2019 to US$12.4 million in 2020.

“Quantities imported grew from 1,063 tons in 2019 to approximately 4,200 tons in 2020. In essence, local Styrofoam production has simply been replaced with foreign plastic alternatives, supporting external economies while the desired environmental impact of the ban has not been achieved,” said the JMEA.