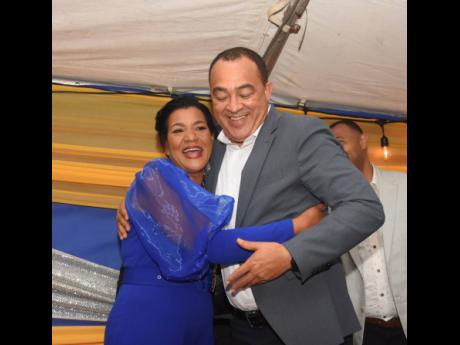 WESTERN BUREAU: Westmoreland has been tagged by Health and Wellness Minister Dr Christopher Tufton as one of the motorcycle crash epicentres of the Western Hemisphere, with the parish’s fragile public-health system grappling with three to five new...

Westmoreland has been tagged by Health and Wellness Minister Dr Christopher Tufton as one of the motorcycle crash epicentres of the Western Hemisphere, with the parish’s fragile public-health system grappling with three to five new collision cases in its Accident and Emergency Unit daily.

“If you take the bike accidents per capita, per the number of population, you would rank, if not at the extreme top, not too far from the top,” the minister told the Rotarians, while seeking buy-in for a public-education campaign aimed at saving lives and reducing pressure on the health system.

Tufton appealed to the social conscience of motorcyclists and the wider community that A&E hospital staff were using several hours a day assess crash injuries – a situation exacerbated by the anecdotally high non-compliance with helmet-wearing regulations.

Citing a visit to the Savanna-la-Mar Hospital weeks ago, Tufton said 80 per cent of patients on the 60-bed male surgical ward were suffering with bone and other injuries from motorbike crashes. All of them had broken bones, he said.

All, or “99.9 per cent”, of the injured patients were not wearing a helmet at the time of impact, the minister said.

His concerns were bolstered by Dr Jean Powell, retired nurse and a member of the Jamaicans Abroad Helping Jamaicans at Home (JAHJAH), who noted that most motorcyclists were apathetic towards road safety.

“It’s almost as if they have signed their death warrants,” said Powell, who added that although JAHJAH bought helmets, bikers complained that they were “too combustible and they can’t see while riding”.

Olga Kelly, a teacher, said she has witnessed the deaths of bikers on the streets of Savanna-la-Mar.

Referencing cavalier behaviour, Kelly said that motorcyclists are known to remove mirrors from their bikes, declaring that they do not wish to see behind them. ‘

Motorcycle accidents are not the only pressure being faced by the hospital.

Non-communicable diseases (NDCs) such as heart complications and stroke are among the long list of woes facing healthcare staff, Tufton said.

The health and wellness minister acknowledged that resource-related deficits, such as equipment in need of repair or replacement, caused downtime in patient care in operating theatres.

“It becomes really, really difficult. And it is true that we need a bigger hospital ... . So I am not here preaching a perfect system, because that would be hypocritical of me, but we try,” he told the Rotarians at the event, where businesswoman Sandra Molyneaux was installed as the 53rd president of the organisation.

Currently, the Savanna-la-Mar Public Hospital has two operating theatres, eight surgeons and six nurses dealing with operations. There are also three anaesthesiologists, with one on staff.

As at July 1, there were 235 crash fatalities islandwide, representing a two per cent decline in relation to the corresponding period in 2021.

Motorcyclists account for 27 per cent of road users killed this year, but the 63 fatalities represent a 26 per cent slide from the five-year-high of 85 killed in 2021.

The 23 motorcyclists killed in Westmoreland this year is more than a third of the islandwide toll among that category of road users.