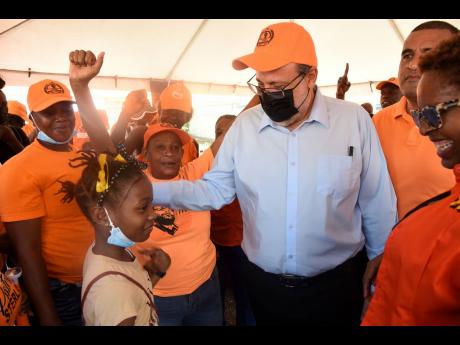 Fresh on the heels of his nomination for presidency of the People’s National Party (PNP) on Tuesday, incumbent Mark Golding says he is expecting a solid performance from the party in the local government polls that are due no later than February 28, 2023.

Noting that he did not expect to be challenged for the leadership of the party, Golding said he had made strides in uniting a PNP that has been bedevilled by disunity over the last three years.

“Where we are right now, there is one leader, and I have the full support of everybody on board, so I wasn’t anticipating any challenge.”

He blamed the Government for “dragging out” the holding of the local elections, noting that it used COVID as a basis for extending the polls even though it called the general election in the middle of the pandemic.

“We have been working in the meantime, strengthening our organisation, getting our candidates in place; we have some excellent young candidates,” said Golding, who is also the opposition leader.

While being guarded about giving predictions in the upcoming local government elections, Golding said he expects the PNP to “do well and hold our own and improve our positions”.

Asked whether the party was considering granting membership to Dennis Meadows, a Jamaica Labour Party turncoat, Golding said that Meadows’ application has not been reviewed by the executive of the party as yet.

According to the PNP president, the executive will consider his application when the time comes.

At PNP headquarters on Tuesday, attorney-at-law Donna Scott-Mottley was the sole female vying for one of the posts of vice president of the party. Mikael Phillips, Norman Scott, and Ian Hayles are the other persons nominated on Tuesday. The nomination closes on Friday.

Scott-Mottley told The Gleaner that this was the first time she was being nominated for any position in the party.

She said that her bid to become vice president is a clear signal to that the party was on a path to unity.

First appointed by late Prime Minister Michael Manley to the Senate in 1989, Scott-Mottley also served as senator under the P.J. Patterson and Portia Simpson Miller administrations, and as leader of opposition business in the Upper House when Dr Peter Phillips was opposition leader.

“We know a united People’s National Party is unstoppable,” she said.

Mikael Phillips, who resigned as vice president last year, is again vying for that position in 2022.

The Manchester North West member of parliament said that the party is on a rebuilding mission. Phillips said that he was committed to ensuring that the organisation regains state power to address the many challenges facing Jamaicans.

“It is for us now as a political movement to come together to bring policies that will make Jamaica stronger when that time comes,” he said.