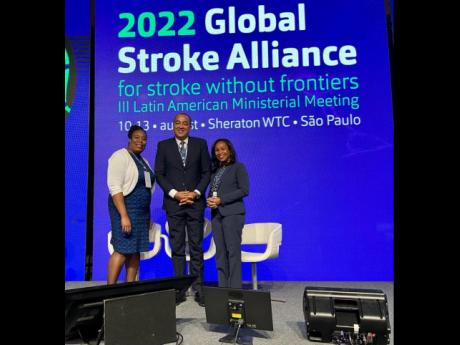 Contributed
(From left) Gillian Gordon-Perue, assistant professor of neurology at the University of Miami; Minister of Health and Wellness Dr Christopher Tufton; and Dr Tameka March-Downer, consultant neurologist at the University Hospital of the West Indies, at a Global Stroke Alliance meeting in Brazil.

Jamaicans are being urged to rush to hospital immediately after the onset of a stroke amid worryingly slow response rates and revelations that a third of local victims die from the brain attack and its complications.

There are also fresh concerns about the growing incidence of stroke among young people and its 40 per cent non-recovery rate for productive workforce engagement.

There are also plans to establish dedicated stroke units in hospitals to reduce death and disability through the provision of specialist multidisciplinary care.

Consultant neurologist at the University Hospital of the West Indies (UHWI), Dr Tameka March-Downer, said Jamaica does not have a stroke riskometer, a critical tool that assesses an individual’s likelihood of getting a stroke.

“Stroke has to be addressed as a non-communicable disease, and a part of that plan is to put in place protocols in terms of management for patients from the pre-hospital to the hospital, to the post-hospital, and also an essential part is for primary care prevention, which is where the riskometer will come in.

“We are still having quite a high number of patients with stroke, and what we are now seeing is a shift in the age, the 30-to-40-year-olds, compared to the over 65 who we were seeing previously,” she told The Gleaner.

She said that the top three risk factors in Jamaica are all modifiable and if addressed, could significantly reduce the number of people affected by stroke.

“We are resource stricken and, therefore, in tackling stroke, we must have a big arm at the primary prevention level and a medium arm at the treatment of stroke. It is always better to prevent a stroke and it is also cost effective,” March-Downer said.

According to the World Health Organization, only 40 per cent of Jamaicans who suffered a stroke last year recovered sufficiently to return to work.

Over time, the loss of economic activity could account for two per cent of the country’s gross domestic product.

March-Downer explained that Jamaica is struggling to make thrombolytics – an intravenous tissue-type plasminogen activator – a single dose of which costs $400,000 and thrombectomy – a clot retrieval therapy – readily available in hospitals due to cost.

These interventions reduce the mild to permanent disability of stroke patients who present to hospital unable to speak, walk or swallow.

The consultant neurologist said patients receiving the treatment would also have to be admitted to a high-dependency unit.

UHWI is the only hospital that has the capacity to offer thrombectomy treatment. Since January, four patients have received thrombolytics.

March-Downer shared that two in every three Jamaicans who suffer a stroke arrive at hospital 12 hours after experiencing symptoms, well beyond the acceptable time frame for treatment to be initiated.

“It is such a shame. Within three and a half hours is the optimal time, and up to four and a half hours you can still get a benefit. After that, you can no longer benefit from thrombolytics.

“Up to 24 hours after, you can benefit from thrombectomy, but again, we don’t have that readily established yet,” she said.

The main reason given by patients is that they did not realise they were having a stroke or they tried alternative treatments before coming to hospital.

The data also showed that well educated patients and those experiencing severe stroke symptoms tend to present to hospital faster.

March-Downer said that patchy ambulance coverage, limited availability of CT scanners in major hospitals, Jamaica’s deficient road network which creates difficulty for patients in rural areas, and lack of response knowledge are among the barriers to stroke care.

Meanwhile, Minister of Health and Wellness Dr Christopher Tufton has committed to establishing at least three stroke units at major hospitals in Jamaica, over the next year, in collaboration with the Jamaica Stroke Alliance.

The units will be located at Kingston Public Hospital, the University Hospital of the West Indies, and Cornwall Regional Hospital.

Referencing last year’s stroke data, Tufton said the fatalities make stroke the leading cause of death in the country.

“It is a very important area to address. A lot of it is lifestyle –our consumption habits, diet, exercise – some of it is hereditary, but what is very, very clear is that it requires urgent attention,” Tufton said.

March-Downer and Tufton are members of the Jamaican delegation attending the third Latin American Ministerial Meeting on Stroke in Sao Paulo, Brazil, as part of the Global Stroke Alliance 2022 Meeting.

This year’s meeting will have in attendance representatives from more than 25 countries, eight health ministers, and more than 100 national and international guests.