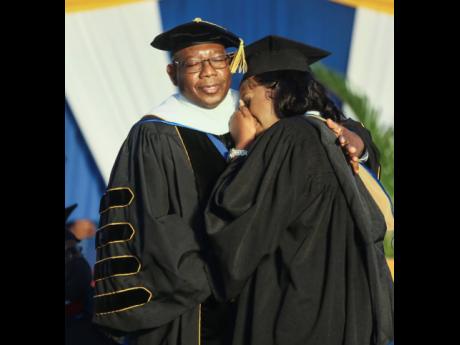 Nathaniel Stewart/Photographer
Waid-Ann Wedderburn, whose mom died from breast cancer months ago, is consoled as she accepts her degree from Dr Lincolnn Edwards, Northern Caribbean University president, at her graduation on Sunday. 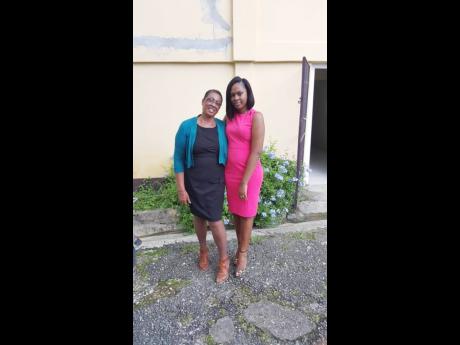 When Waid-Ann Wedderburn burst into tears before being awarded her degree on Sunday, many assumed the Northern Caribbean University (NCU) graduate was simply overjoyed at having mastered a tough academic challenge.

Overcome with emotion, Wedderburn was ushered off the stage and consoled, then returned, still in tears, but mustered enough strength to accept her Bachelor of Science degree in management studies from university president, Dr Lincoln Edwards.

Sighs echoed throughout the audience when it was disclosed that the 22-year-old had lost her mother four months ago.

Wedderburn told The Gleaner that her graduation from the Manchester-based institution was her mother’s greatest wish.

As time wound down towards the big day, Wedderburn’s celebratory spirit waned when her 56-year-old mother, Patricia Box, was hospitalised in April.

“About two weeks before she passed, she said to me, ‘How mi a go make it to graduation? You nuh see say mi can’t walk?’” the graduate recalled.

“With tears in my eyes, I said to her, ‘Mommy, nuh worry. It’s going to be on YouTube, so you can watch it from home’,” Wedderburn said.

That hope fizzled when Box died on April 16 of breast cancer, a disease she had been fighting since 2003.

Hours before her passing, Wedderburn had hugged her mom, almost willing her to hang on for the graduation milestone.

Amid the grief, the 22-year-old has reminded herself that she was honouring her mother’s dying wish.

“While going on the stage to walk for my degree, I was saying to myself, ‘Be strong,’ but when I stood on the stage, I remember that Mommy took me to NCU in August of 2018 and she cried when she left me there. Now she would not get to see that all her work did not go in vain,” she said in an interview on Tuesday.

“When I looked around and I saw all my family and friends, but not the one person who made it all possible, I couldn’t hold back the tears.”

Wedderburn, the youngest of her mother’s five children, said Box was her biggest motivator and cheerleader.

She described the days since her mom’s death as a nightmare, disclosing that she was initially unable to eat or sleep.

“I was an emotional wreck. It reached a point where I had to go for counselling, because I was on the verge of going into a deep depression,” she said.

She described her mother as her best friend, a confidante, and a charismatic woman of faith.

Wedderburn says she now finds solace in her siblings, though they, too, are having a difficult time coping.

The graduate said she plans to honour her mother’s legacy by launching a charity geared towards supporting children whose moms are battling breast cancer.

“I also hope to have campaigns which educate women about breast cancer and offer counselling to those who continue the fight against breast cancer,” she said.