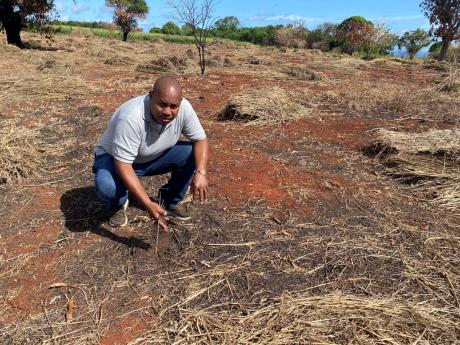 Photo by Ainsworth Morris
Peter Campbell, one of the farmers who is yet to recover from the major fire in Flagaman, St Elizabeth, last month. 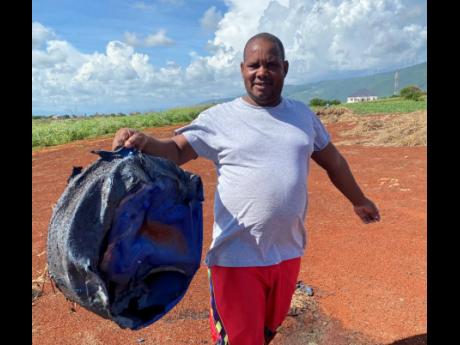 Photo by Ainsworth Morris
Orden Reynolds, one of the victims of a major fire which scorched farms in Flagaman, St. Elizabeth, on August 16, shows what is left of one of the tanks destroyed in the blaze. 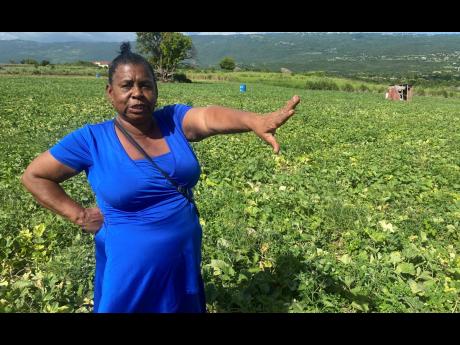 Photo by Ainsworth Morris
Zenora Reynolds Davis, a farmer in Flagaman, St. Elizabeth, who lost crops twice in the last two major fires on August 16 in the years 2019 and 2022. 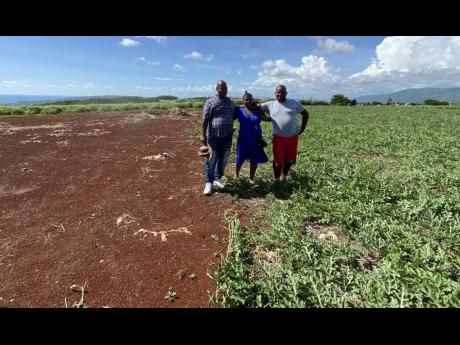 Photo by Ainsworth Morris
From left: Siblings Huntley Reynolds, Zenora Reynolds Davis and Orden Reynolds standing between an area of their farm which was razed by fire last month and the section which was spared.
1
2
3
4

August 16 will forever be etched into Zenora Reynolds Davis’ memory after she suffered huge losses as a result of two devastating fires which ravaged farms in Flagaman, St Elizabeth, on that exact date in both 2019 and 2022.

When the third anniversary of the 2019 fire came around last month, the 64-year-old Davis, who has been farming since she was 14 years old, never, in her wildest thoughts, thought she would experience a déjà vu.

Although the fires took place in two different sections of the community, Reynolds Davis owns one section of land through inheritance and another through a lease agreement. The property burnt in 2019 was the one she had leased. The other piece of land she owns and cultivates with her brothers.

“I had burn out [in 2019]. I lose drip hose, thousand-gallon drums, and we get help from the company dem weh come on and help we, … but in three years, August 16, destruction tek mi again, but I’m not giving up, because farming is my living. ... It’s 50 years I’ve been farming and I will continue because it makes me independent,” Reynolds Davis told The Gleaner.

While standing on the land where the fire took place three years ago, she described the catastrophic event as “destruction”.

Reynolds Davis, who mainly plants watermelon, cantaloupe and tomato, said she loves farming as it helps her to not only feed herself but other people as well.

Additionally, she said, farming makes her feel powerful as she plants seeds in the ground, nourishes them and reaps the fruits and vegetables.

Her three younger brothers – Orden, Huntley and Rupert Reynolds, who are melon and cantaloupe farmers – also suffered losses in the fire last month as the blaze swept across the family land, resulting in millions in losses.

“We are looking forward to giving it a try [again] and dropping grass and thing. RADA people dem gi wi little grass and we buy some to restart,” Orden told The Gleaner on Thursday, referencing the Rural Agricultural Development Authority.

His crops on two different plots of lands perished in the fire, the source of which is still unknown.

The Reynolds family told The Gleaner that they have never insured their operations as their money “go from garden to garden”.

The siblings boast that the lands they own are envied by many, given that they overlook the coastline, including popular beaches and leisure spots in St Elizabeth, including Lashings, Treasure Beach, and Great Bay Beach.

“We’re near to the sea. Everybody would like to have a garden round here because in the winter, we get good crop around here. We don’t lose crop ‘round here [apart from in a fire],” Reynolds Davis told The Gleaner, noting that the location is also sought-after for residential use.

Her brother, Huntley, said he was heartbroken on the day of the fire.

“When you look pan di garden just burn to ash and there is nothing you can do about it, more than just tek it easy and gwaan. A five time grung bun dung fi mi; five different times, and cantaloupe and honeydew ready fi pick and tomato and everything just bun off. One acre of onion just bun off ready fi pull, too,” the devastated farmer told The Gleaner.

He pointed out charred mango trees which also fell victim to the fire on lands managed by another farmer, Peter Campbell.

On Thursday, the Ministry of Agriculture and Fisheries, H&L Agro, Food For The Poor Jamaica, Fersan, Hi-Pro and other organisations donated various farming items and vouchers to the siblings and other farmers who suffered losses in the last two major fires in Flagaman.

But, the farmers pointed out, fire is just one of their many miseries. Another is the continuous pressure to sell their crops for lower than satisfactory prices to middlemen, which is equally devastating.

Reynolds Davis said that when the middlemen do not buy at the prices they ask, they eventually have to give away their ground provisions for free as they would go to waste.

“Sometimes we have melon, [it] don’t sell no price. The last tomato crap I have last year, I didn’t even sell one pound. Customer come and want them, just pick them, and move with them without money, so I lose completely, but no matter the loses in farming, I don’t give up because farming is my life,” said Reynolds Davis.

“It’s not all the while I lose,” she admitted, however. “Sometimes I gain. If I lose the tomato today, probably I have this melon and I get the melon [sold] … . Now, the cantaloupe work out well, so if I fail with the tomato, I can use the cantaloupe money and go back over there.”

She is looking forward to picking a batch of melon in two weeks if the weather system set to affect the island this weekend does not damage them.

“Farmers are the heroes that have brought us through the pandemic, continue to provide food for us, and so, we have a responsibility to make sure that we come and do the assessments,” Agriculture and Fisheries Minister Pearnel Charles Jr said on Thursday.

“We have done the assessments and we have brought in our strategic partners, stakeholders and friends ... who have come together to pool our collective efforts and resources to get these farmers back on track,” he added, reiterating how farming was not only to Flagaman, but to St Elizabeth – the Breadbasket Parish – and Jamaica at large.

“Flagaman is an important and special place. Flagaman has the highest number of registered farmers in our country. It’s a traditional farming space where they [possess] the skill set and the passion, it’s generational, and so it is fitting for us to be here to really show these farmers that they are valued,” said Charles Jr.

The Government provided the farmers with water tanks, irrigation kits and seeds of new crop varieties.

Charles Jr said that their water supply concerns would be addressed soon.