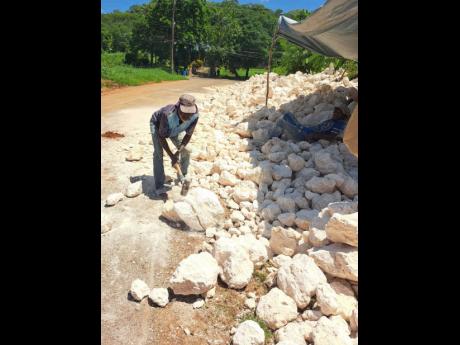 Photo by Rasbert Turner
Donald McLean using a sledgehammer to break rocks near Big Pond in St Catherine on Friday as workmen constructed a retaining wall to address a long-standing flooding problem. 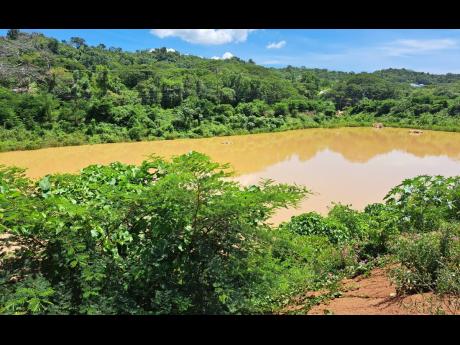 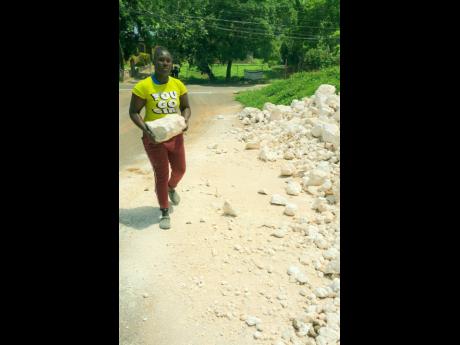 Photo by Rasbert Turner
Dian Humes carries boulders to workmen constructing a retaining wall in the vicinity of Big Pond near Old Harbour in St Catherine on Friday.
1
2
3

Residents of Bannister and surrounding communities in St Catherine are praying that the forecast torrential rain from a weather system set to affect the island this weekend will not result in the infamous Big Pond heaping another round of flooding woes on them.

On Friday, as a tropical depression which was expected to develop into a tropical storm by today moved closer to the island, residents expressed anxiety as a group of men worked on a retaining wall along the roadway in the vicinity of the pond.

“For the last eight years, my shop get wash out and I received no help. I am just praying that if it comes here, there will not be any rain as that is the real danger,” businesswoman Erica Jemison told The Gleaner on Friday. “I am fed up with the problems, as any time the Big Pond flood, I lose big time.”

With sledgehammer in hand, Donald McLean cracked stones at the site to build the retaining wall.

Dian Humes was also out assisting the crew, saying she was happy to help to carry the boulders to the workmen.

“I feel good about the wall that is being built as it will prevent the water from blocking the roadway,” Humes said.

“I am very pleased that some good work is being done as I have seen what the water do to the community,” resident Jermaine Wright chimed in.

By mid-afternoon, many residents had already done their shopping and had returned home to finish preparing for the possible storm.

“My mother did not go to work today as she is home battening down. We live together but she is really fretting and hoping that [it] doesn’t come, but that is just hope,” bartender Melissa Thompson told The Gleaner.

Big Pond has been a perennial pain for residents of the area as it often overflows its banks during periods of heavy and continuous rainfall, rendering the roadway impassable.

Last year, some $20 million was spent by the National Works Agency to excavate the pond in a bid to limit the risk of flooding, but that did not fix the issue in the area, which connects several communities in the Greater Old Harbour locale.

While grateful for the additional work currently being done, residents believe the authorities have been moving too slowly to address the situation.

“The pending disaster is really a threat to life within this area,” taxi driver Marcus Thomas said. “I have been a taxi operator here for 15 years and we simply cannot have a storm at this time. It would hold us back.”