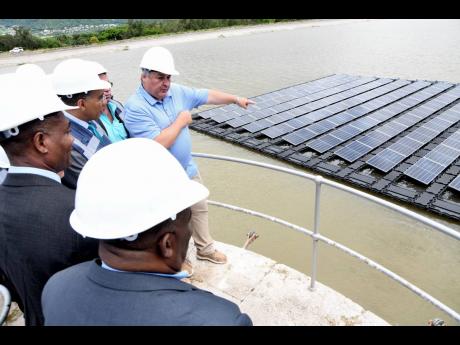 “I don’t want Jamaicans to be fearful when you see your Government taking on massive nation-building projects,” he said while speaking at the launch of the National Water Commission’s (NWC) Mona Reservoir floating solar plant on Wednesday.

Stating that roadwork and housing projects redound to the benefit of all Jamaicans, Holness said that much of the nation’s current ageing infrastructure have reached their limits. He said that future generations should also benefit from infrastructural works like the pending transformation of the Mona dam, which was built in 1946 on a former sugar plantation.

“When I scan some of the commentary about the Government’s infrastructure and development projects, there appears to be a great dissent, objection against development. There is a strong anti-development sentiment,” Holness said, adding that this was driven by a lack of understanding.

He said that, contrary to the views of critics, the Government is able to undertake major development projects without harming the environment.

The London-based Derillion Energy Limited is funding the construction of a 45-megawatt floating solar plant, at a cost of US$62.5 million, at the St Andrew-based dam.

Derillion Energy founder Simon Piggott said that, when completed, it will be the fifth-largest solar project in the world.

The aquasolar floats are also made from 100 per cent recycled waste plastic, and the systems are expected to offset energy use from the pumping station and provide excess power to the utility for improved transmission, reliability and power quality.

Four acres of land will be leased to facilitate the installation of inverters and batteries among other equipment.

NWC will have access to 10 megawatts, with the intention to acquire a wheeling licence to transfer energy from the reservoir to other facilities.

The benefits of the project include clean renewable energy and a reduction in the Mona Reservoir processing energy costs currently being generated from renewable energy on site, saving up to US$120,000 annually.

The overall project is expected to be completed by the end of the first quarter of 2024.

NWC Chairman Michael Shaw said that, despite the addition of a few solar panels and changing out water pumps to reduce the cost of electricity, the agency was still feeling the impact of rising oil and energy costs, with an average monthly electricity bill of $1.1 billion.

He said the project at the Mona dam would be a “game-changer and one of the biggest investments of the country”, as it will assist the NWC in reducing its reliance on traditional sources of energy.

Senator Matthew Samuda, minister without portfolio in the Ministry of Economic Growth and Job Creation, also pointed out that the NWC is the Jamaica Public Service Company’s largest customer, with the Government paying, on average, between 38 and 42 cents per kilowatt-hour.

“The reality is, for us to truly transform NWC ... , we must transform how we consume energy and we must lower the price that we pay,” Samuda said, noting that this was one in a series of projects to be launched.

Samuda said that the 50-kilowatt floating solar photovoltaic plant demo system, which was built in June, has already shown the financial benefits that will come through the reduction in energy bills.

He reported that, in June, the NWC recorded a 28 per cent reduction in the JPS general consumption and a 38 per cent fall in July, when compared to May.

NWC President Mark Barnett informed The Gleaner that this project will not result in customers bearing additional costs, but that they are likely to, instead, see a reduction in their bills as the NWC reaps the benefits of the system.