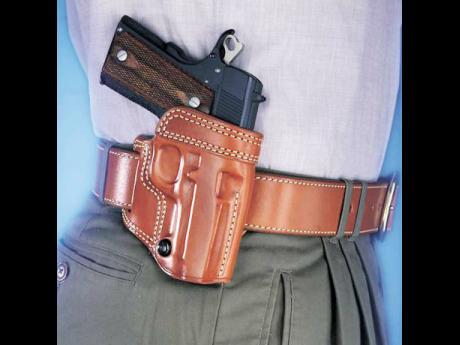 File
Attorneys are split on the proposed plan for a theoretical test for gun permit applicants.

The nation’s firearm regulator is expected to add another layer of scrutiny for the granting of gun permits when it introduces a written component to the list of requirements for applicants. Come January, Jamaicans seeking a firearm permit will be...

The nation’s firearm regulator is expected to add another layer of scrutiny for the granting of gun permits when it introduces a written component to the list of requirements for applicants.

Come January, Jamaicans seeking a firearm permit will be required to pass a theory-based exam before being authorised to use a weapon, a well-placed source at the Firearm Licensing Authority (FLA) has informed The Gleaner.

The decision comes amid increased concerns about the misuse of weapons by licensed carriers, the source said.

However, it is not clear whether the new regulation is also expected to impact those already in possession of permits when seeking renewals.

According to the Gleaner source, the entity receives reports of infractions monthly of licensed users engaging in activities that contravene use-of-force standards.

“So, while they are taught, there’s no test to show that they appreciate the concept. So we’ll be implementing the written aspect to test on use of force,” the source said.

Currently, the FLA instructs permit holders on how to use weapons. That is followed by a practical test before approval is granted.

Attempts to contact Shane Dalling, the FLA’s chief executive officer, about the theory exam were unsuccessful, as calls to his mobile phone went unanswered on Monday.

The projected implementation hints at the FLA’s push to scour its image amid claims of entrenched corruption at the entity, including several gun permit scandals where approvals were granted for applicants with criminal antecedents.

Noted criminal-defence lawyer Peter Champagnie, KC, is not in favour of the decision, noting that there is no clear reason for such a measure.

“Very often there is a tendency in this country to complicate statutory processes. There is, to my mind, based on the criteria set out, for one to be a successful applicant, a presumption the applicant is literate and of a certain maturity.

“That there is contemplation for a written test may point to a failing on the part of those who are supposed to vet applications,” he said on Monday.

Champagnie argued that there is no reason why an assessment cannot be done during training by the instructor.

“It seems to me that it’s more a mistrust of the trainer’s ability to impart the information and for that trainer to certify [an] applicant,” he said.

But colleague criminal defence attorney Bert Samuels said the regulation would be welcome, as several countries, headed by the US, move to tighten gun-control measures.

The declared conservative argued that the requirement would be another layer of protection for both the user and the general public.

“Shooting is something for which training has to be given. You cannot, in all circumstances, shoot to kill. The law of self-defence is that if the danger is over, then you’re not permitted to use lethal force.

“So, if I were constructing a curriculum for that test, those are some of the things I would want to put in the exam,” said Samuels.

Additionally, he said the requirement is likely to lead to a reduction in the misuse of firearms by licensed holders.

And last week, 15-year-old Wolmer’s Bay student Raheem Shaw was shot dead by his father at their home in Hellshire, St Catherine.

Raheem, who was said to be returning home sometime after 3 a.m., was reportedly mistaken for an intruder.

“The use of a firearm and its consequences are irreversible. There is a written test for motor vehicle licence because they can be lethal. So I think moving in the direction of a written test is good,” Samuels said.