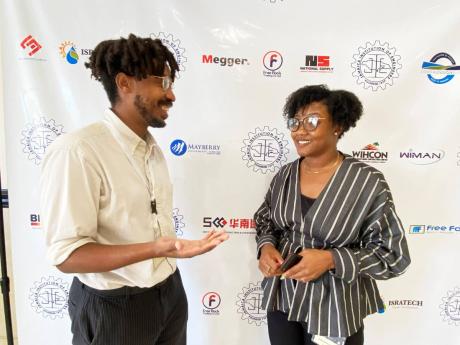 Photo by Ainsworth Morris
Jhordan Channer (left) and Dorraine Duncan, co-founders of Island City Lab, in discussion during the Jamaica Institution of Engineers’ Conference at The Jamaica Pegasus hotel on Tuesday. 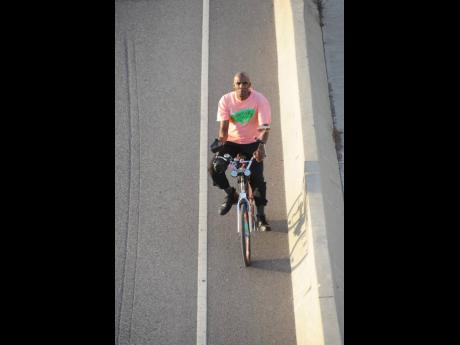 File
A man is seen riding a bicycle along Highway 2000 in this February 26, 2014, photograph. Two young lobbyists have called for bicycle lanes in Jamaica.
1
2

Dorraine Duncan and Jhordan Channer, co-founders of Island City Lab, have called for the Government to urgently establish cycle lanes in the Corporate Area. The youthful duo, who argued on the second day of a Jamaica Institution of Engineers’...

Dorraine Duncan and Jhordan Channer, co-founders of Island City Lab, have called for the Government to urgently establish cycle lanes in the Corporate Area.

The youthful duo, who argued on the second day of a Jamaica Institution of Engineers’ conference, have also lobbied for more bus-only lanes.

If implemented, the recommendations are expected to increase commuter safety and decrease congestion, with the city benefiting from environmental gains.

“All the ways that we develop our towns with places that we put up residential and commercial, they’re at the scale of cars. Not at the scale of people that are walking, and a lot of economic side effects that are really negative to our city,” Duncan said at The Jamaica Pegasus hotel on Tuesday.

“It’s very expensive. In addition to that, they are also very dangerous, so having a car-dependent development pattern means that people are usually having negative encounters with cars, so there are a lot of that happening across the area.”

Channer has also advocated for the narrowing of road lanes, arguing that the current widths unwittingly promote speeding and increases the risk of room for error.

“Our lanes are too wide, and because they’re wide, they encourage speeding, so driving is largely unconscious. There are all these education campaigns to stop speeding, to not use your phone while driving, but because the roads are so wide, and that’s based on the standards that NWA uses to design roads, ... it promotes speeding and it’s easy to be distracted,” Channer said.

Duncan wants a philosophical rethink of the focus of motor vehicles in urban planning, arguing that too much space is consumed accommodating them in the transport network as well as for parking.

While referencing Spanish Town Road as Jamaica’s most dangerous corridor in Greater Kingston, Duncan also criticised the multi-foot medians that have become a feature of Legacy projects such as Constant Spring and Hagley Park roads.

She argued that there was insufficient regard for pedestrians.

“There is no sort of spacial allocation for those type of people, so what you find happening is that people are trying to cross a six-lane road. They make it halfway, and think you make it, and you try to cross the other three lanes and then you get hit, so it is a very hostile space,” Duncan told The Gleaner.

Her sentiments corroborate the views of some local architects and engineers, but the NWA contends that high barriers militate against head-on collisions.

Crash fatalities, which were at 347 as at Tuesday, have fallen by three per cent over the corresponding period in 2021.