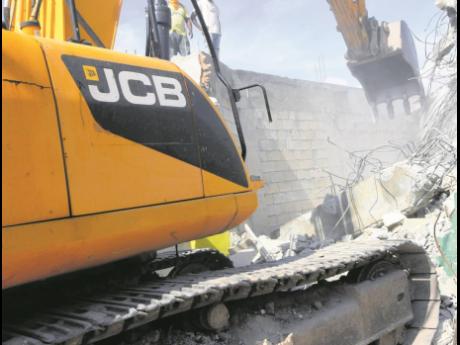 The Government is cracking down on a criminal gang accused of a land grab on the outskirts of Clifton, St Catherine, and will today start the demolition of 30 illegally erected houses.

The lands, which fall within the Government’s Greater Bernard Lodge Development Plan, will be formalised and owners given titles, but criminals have captured a section designated for agriculture, Prime Minister Andrew Holness told lawmakers Wednesday.

“We’re not an evil Government. We are not an unthinking and uncaring Government. We care, so after we have demolished the incomplete structures, then we will engage a process to deal with the structures that are complete and occupied,” Holness said in the House of Representatives, hours before the demolition was slated to begin.

SCJ Holdings had given warning and served notices to cease and desist construction on the captured land, Holness said.

“This illegal capturing and building on public or private land will not be tolerated,” he said.

The prime minister argued that the illegal construction compromises the development plan and swipes land designated for agriculture.

He said directions have also been given to the security forces to maintain a strong presence in the area to treat with any criminal threats that may want to interrupt, exercise control, or present any obstacle to the Government rectifying the situation.

The Jamaica Defence Force has deployed a forward-operating base metres from the area and is undertaking regular patrols and creating a security blanket, including drone and other surveillance.

Holness said that Clifton predated the development plan for the Greater Bernard Lodge area. However, the Government, as far back as 2009, or even before, and across administrations, decided that that community should be regularised.

He said the process of regularisation was ongoing, with many informal settlers given letters of possession.

“SCJ Holdings Limited has already in hand in excess of 350 registered titles for lots in the Clifton community, and these will, shortly, be distributed to the new landowners,” Holness said.

He praised St Catherine Southern Member of Parliament Fitz Jackson for playing a significant role in regularisation and titling.

Additionally, other development plans are on the way for Clifton.

“We are committed to upgrading the road network in the community and to provide residents with access to a proper water supply and connection to a central sewerage system which is now under construction,” Holness said.

“Our review of the community shows that it has been a community that has been captured by criminal gangs,” he said.

The prime minister said in the proximity of Clifton, an area has been captured and the National Security Council, in reviewing the plan, observed an invidious and growing threat.

The Greater Bernard Lodge Development Master Plan vision is to create and sustain a vibrant, resilient community and to protect its character and longevity while tackling the challenges of affordable housing, transportation, access to jobs, and services.

The Cabinet appointed an enterprise team chaired by Linval Freeman, chartered accountant, to supervise the divestment of state-owned lands within Greater Bernard Lodge.

Work commenced in January 2021 with the aim of divesting development lands in phases. To date, two phases have successfully been completed, with a third now in progress.