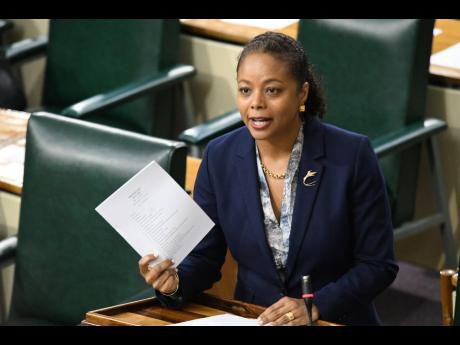 Rudolph Brown/Photographer
Minister of Legal and Constitutional Affairs Marlene Malahoo Forte addresses lawmakers about the much-anticipated Bail Act which was tabled in Parliament on Wednesday.

The Bail Act 2022 tabled in Parliament on Wednesday has introduced new provisions that may deny bail to someone accused of committing murder within a zone of special operations (ZOSO), or in an area where a curfew or state of public emergency has been declared.

The long-awaited proposed legislation also has a provision dealing with the granting of bail in certain circumstances whereby the defendant wears an electronic tracking device so that their movements can be monitored.

Defence attorney Peter Champagnie, KC, said that while he understands the reasoning behind the geographical references in the bill, the provision may be subject to abuse.

“Based on the other considerations that must be applied to bail, I hardly think it is necessary for that to be spelt out and to be specifically stated because it still has a wide-reaching provision, which takes into account other matters in terms of whether or not the person on bail is a threat to the witnesses and community. To my mind, it is a bit redundant in that regard, although I see the rationale behind it,” Champagnie said.

Commenting on the pre-charge provision in the bill, Champagnie said that this could take place where a person who is detained and not yet charged can be given bail.

“I know that some of my colleagues have difficulty with it in terms of the Constitution,” he told The Gleaner, noting that he has been advocating for a provision like this for some time now.

The senior counsel said there are cases, for example, at the Fraud Squad, where, because of the nature of the probe, it may take a long time to complete the investigation, but the police may want to charge a person.

However, he said counsel could suggest to the police that his client is prepared to hand over his passport and keep in touch with the investigators until the completion of the probe.

“A compromise is reached, and I think that that aspect of the new bill, where you have somebody detained and you are not ready to complete your file, it is going to prevent persons from being detained inordinately,” Champagnie said.

He described it as a major positive in the law, noting that a similar provision is provided in legislation in The Cayman Islands and other jurisdictions.

Clause Seven of the bill indicates that where an offence for which a defendant is charged or convicted is punishable with imprisonment, the accused may be denied bail in certain circumstances.

The circumstances are that the deciding official is satisfied that there are grounds for believing that the defendant, if released on bail, would fail to surrender to custody, commit an offence while on bail, or interfere with witnesses or otherwise obstruct the course of justice.

Minister of Legal and Constitutional Affairs Marlene Malahoo Forte, who made a statement in Parliament on Wednesday on the new bill, said that a joint select committee would be established to review the Bail Act 2022.

According to Malahoo Forte, the bill sets out the officials who will grant bail. They are the judge, the justice of the peace, and a police constable who is neither the arresting officer nor an officer involved in the investigation of the offence.

In cases of pre-charge bail, this should be done by a police officer at the rank of or above superintendent of police. The question of bail in relation to a child is to be determined by the Children’s Court, in accordance with provisions in the Child Care and Protection Act.

St Catherine Southern Member of Parliament Fitz Jackson welcomed the tabling of the bill, but noted that it took a long time to reach before Parliament.

He said that the Opposition had no difficulty with the strengthening of provisions in the Bail Act.

However, Jackson cautioned that the legislation must be in keeping with the provisions of the Constitution.

“There have been bills passed in this House that the court has struck down as being unconstitutional. That is a matter of fact,” Jackson declared when challenged by government legislators in sotto voce remarks.

If passed by the legislature, the Bail Act of 2022 will repeal and replace the current Bail Act.