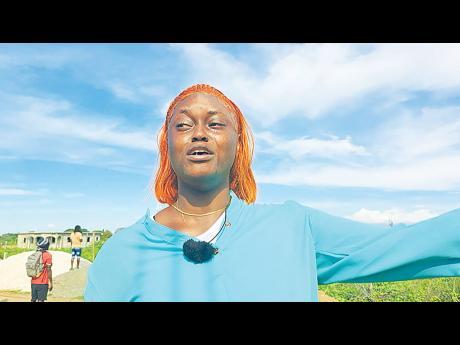 This video grab image from Ruddy Mathison shows a devastated Shaniel Francis who cried as her home was demolished in St Catherine Thursday. The homes of 10 other persons were also torn down. 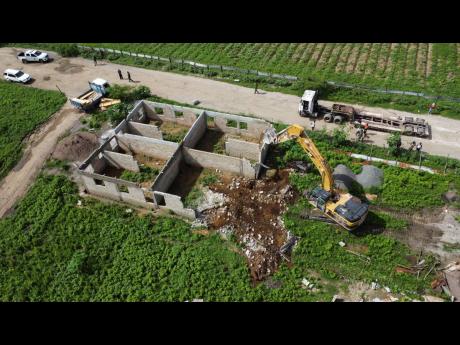 Ricardo Makyn/Chief Photo Editor
Aerial view of a demolition crew at work in an informal settlement on the margins of Clifton, St Catherine, on Thursday. 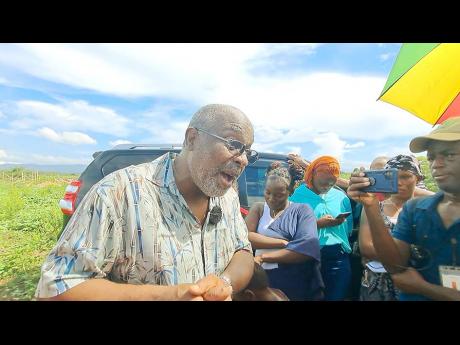 The demolition of some 30 unfinished houses constructed illegally on the outskirts of the Clifton community in Portmore, St Catherine was halted on Thursday after a crew had destroyed 10 of the units. As early as 6 a.m., the security forces had...

The demolition of some 30 unfinished houses constructed illegally on the outskirts of the Clifton community in Portmore, St Catherine was halted on Thursday after a crew had destroyed 10 of the units.

As early as 6 a.m., the security forces had sealed off roads leading to the area, restricting the movement.

The residents were told that they would be given 48 hours to produce a certificate of possession for the plots of land they now occupy, in order to protect them from falling victims to the demolition process.

It is not clear who gave the order for the demolition to cease. However, St Catherine Southern Member of Parliament Fitz Jackson, who was on location on Thursday, said that he was left with that understanding after having dialogue with representatives of SCJ Holdings, owners of the land.

While the operation was halted, it had already begun to bring grief for several residents, some of whom stood hurling expletives as the demolition crew tore down some of the structures and uprooted the foundations.

Twenty-three-year-old Shaniel Francis said that she had unknowingly purchased a lot for $800,000 from unscrupulous persons who also issued her with a receipt.

She was overcome with grief on Thursday after learning that the house she had started to construct was being demolished.

“I hear about land selling over here and I came and bought piece. I spend another $400,000 to buy steel, cement and block, and pay workmen to start building the house,” she told The Gleaner.

With tears streaming down her face, she continued: “Everything gone. Mi nuh know where to turn now. Mi work, mi join round robin just to buy the land and start the building. Up to now, mi still owe the round robin money and see everything gone, all of mi savings.”

Francis said she was made to believe that the transaction was legal and that SCJ Holdings would be regularising the lots and handing over a title.

Donnette Douglas, a third-generation occupant whose grandparents and parents were sugar workers settling on the property after then Prime Minister Portia Simpson Miller brokered a deal with the SCJ Holdings for some 350 lots for sugar workers, was spared in the initial onslaught.

She could be on solid grounds, according to Jackson, as she was able to produce a certificate of possession, a copy of which she showed to The Gleaner.

Nevertheless, she was mired in a state of anxiety up to late yesterday, unsure of what her fate would be after the 48 hours elapsed.

“Mi go a ‘Merica go work hard to start my building. I didn’t steal anything from anybody, and then mi hear sey mi house a go lick dung,” she lamented.

Douglas said she did not get any notification of the planned operation and she only learned on Wednesday night that some houses in the area were to be demolished.

Prime Minister Andrew Holness, who announced the demolition operation in Parliament on Wednesday, said the Government was in the process of formalising the squatter community, where some new persons had acquired lands through illegal means and had started to construct houses.

He indicated that unscrupulous persons were selling lands in the area and building large houses.

Jackson tried to calm the angry residents even as he lamented the predicament he was facing, being brought into a situation that he was not aware of in the first place.

He told the residents that, when the Simpson Miller administration was in the process of formalising Clifton, more lots were created than the number of persons who were living there, and it was done with the expectation that the additional lots would be reserved for persons coming into the community to reside.

“So the expansion was done on the side where they claimed nothing could grow, and, since nothing could grow over there, we say let more people live over there,” Jackson said, adding that the expansion was done on available land that was not conducive to farming. “So, in my head, I didn’t expect to see any expansion on the side that was reserved for farming, so Clifton supposed to finish deh so. This was never part of the arrangement.”

The residents then sought to get clarity as to why one house that was on the area where he said no expansion should have taken place was not demolished in the initial round.

Jackson said he was told that the structure was spared because it had a roof. So the thinking was that a family could be residing there with small children.

The residents were not pleased with his response, one noting that there was no equity in the process.

“If 11 houses are built on the same plot of land, then 11 should be illegal. One should not remain standing and 10 destroyed right around it,” snapped one resident.

Jackson said he would be digging further into the charge by the residents that they were not notified of the impending demolition.