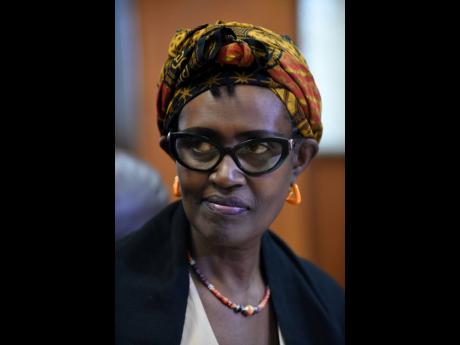 Byanyima made the assertion while characterising Jamaica’s buggery law as discriminatory and a remnant of its colonial past.

“Countries that criminalise LGBTQ people, you find that transwomen, gay men are several times more likely to be living with HIV than in those countries where the laws are not there,” she said in a recent Gleaner interview.

Data show that approximately 33,000 people are living with HIV in Jamaica, representing 1.4 per cent of the population. The prevalence of HIV infections among men who have sex with men is 29 per cent with an even higher incidence among transgender men of 51 per cent.

While emphasising that the UNAIDS mandate is not political, Byanyima said that decriminalising homosexuality will help to rid the country of the virus.

The UNAIDS executive director lauded the efforts of civil-society groups in Jamaica which she says battle strong currents of homophobia to reduce stigma and discrimination.

Jamaica’s large charismatic Christian congregations, as well as its most populous denomination, the Seventh-day Adventists, have significant cultural sway in maintaining the law, contrary to older orthodox churches, which have accommodated gay members and clergy.

“The politicians said it will be very difficult to repeal the law because people are in favour of that law. Our answer to them is that you know there are countries that decriminalised, even in this region … and there are lessons to learn,” she said, pointing to St Kitts and Nevis whose Eastern Caribbean Supreme Court (ECSC) recently repealed the buggery law.

“The law is often the driver of social change. You don’t make a law just because this is what people like. You make a law sometimes to drive the change you want to see in society, and it’s amazing how when you make a law, then people’s mind change … . They see it as right,” she said.

Executive director of Equality for All Foundation Jamaica, Glenroy Murray, argued that homophobia is evident not only in the legal framework but within the health sector and the wider society.

“So it then manifests itself in the kind of discrimination that LGBTQ people are often subjected to in the home, communities, and in certain spaces,” he said.

That stigma, said Murray, is responsible for the increased risk of HIV contact among persons in the community.

“A lot of times, it’s that discrimination that keeps LGBT people from wanting to access care in the public-health system and in other spaces,” he asserted.

Jamaica AIDS Support for Life (JASL) Executive Director Kandasi Walton-Levermore told The Gleaner that criminalisation of homosexuality is a major factor pushing persons in the LGBTQ community underground and away from treatment.

“We can see from our programmes as JASL, and even from some of the national surveys that were done, that members of the LGBTQ community have higher HIV prevalence. We do believe the legislative framework that guides how these communities are viewed and treated acts a deterrent to how persons are able to identify, to how persons access services,” Walton-Levermore said.

Meanwhile, attorney-at-law Alexander Williams said that the country’s buggery law does not serve “much useful purpose”.

“Sometimes laws are done for morality or public perception of morality, but to my mind, laws should be focused on protecting the public interest and being prescriptive,” said Williams, emphasising that these were his views and not necessarily those of the Jamaican Bar Association over which he presides.

Despite an RJRGLEANER-commissioned Don Anderson poll this summer showing that four out of every five Jamaicans want buggery to remain a criminal offence, Williams believes the matter should be settled in a referendum.

“We perceive the answer, but we don’t actually know until we do it. A referendum would the best possible way of coming to that decision because we live in a democracy,” he said.