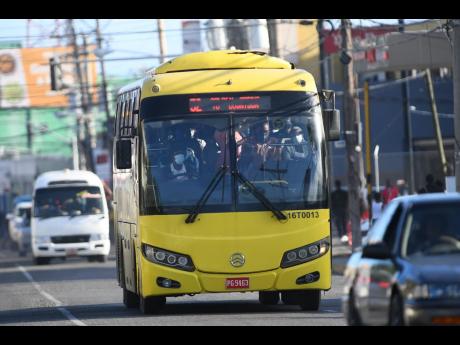 The Jamaica Urban Transit Company (JUTC) has reported more than 300 attacks in the last three years. Drivers seeking to complete their jobs are often attacked or extorted. There seems to be little intervention in hotspot areas, even those close to police stations. Without some intervention, the JUTC will have to withdraw services in these areas leaving residents to suffer.

JUTC – at receiving end of a short fuse

PUBLIC TRANSPORTATION has been called the great artery from which a society's lifeblood flows. The majority of city dwellers rely on public transport to move them efficiently and safely to transact business, for work, for school, for recreational purposes and a variety of other activities in which members of society are engaged.

Alas, commuters who depend on buses operated by the state-owned Jamaica Urban Transit Company (JUTC) have been made to feel unsafe, particularly in the last three years, because of increasing attacks by stone-throwing vandals.

So far this year, there have been 69 incidents. Over the three-year period, the JUTC has reported more than 300 attacks. The Three Miles area of Kingston has been identified as a hotspot where nearly 30 stone-throwing incidents have occurred this year.

The frustration being felt by the JUTC management was on display recently with Managing Director Paul Abrahams saying: “We have to take some bold decisions, as the vandalism of our buses, in quick succession, is affecting our operations and our ability to serve the community public.”

Pointing to the limited success of various initiatives, Mr Abrahams said he was seeking to engage the Police High Command in further discussions. Sorry to break it to you, Mr Abrahams, that may not be your best option. For a start, the police should be the ones coming to you to say, “We have a solution for this problem which has bedevilled you for the past three years”.

The JUTC identified the Hunts Bay police area as one of the hotspots from which frequent attacks are launched. Yet, we have not heard of any response from that quarter. More telling is the fact that these attacks have continued.

Second, the matter of extortion at the various bus depots in urban areas continues unabated. The police, though fully aware of this practice, have not been able to make a breakthrough and punish those who are tormenting legitimate transport operators as they try to eke out a living for their families.

So, based on the above, we cannot see any reason to be hopeful that the police will help the JUTC by identifying and apprehending these stone-throwing vandals who have operated with impunity for three years.

The JUTC admits that it spends millions of dollars to repair damaged buses after attacks. More correctly, it is the taxpayer who is footing that bill.

Taking as an example what happens in other urban areas, the JUTC may find that if they were to demand a fully empowered transit security force, it could be more effective and perhaps way cheaper than the costs incurred to repair buses.

Added to the deployment of transit police, we agree with Mr Abrahams' stated intention to make greater use of technology to get a handle on this situation.

The message to our society is stark: we must come to grips with the growing number of young, angry and poor people. Coming of age, leaving school without a skill or any kind of qualification, and seeing no job prospects, creates profound challenges for these young people and the society in which they live.

As their aspirations of earning a decent livelihood get crushed, their frustration rises. They are fodder for gang leaders. But, for now, they direct their frustrations at state symbols like the JUTC, a stone hurled at a bus is a cry for intervention. Vandalism is a crime, but it is often done by attention seekers.

In the end, if the JUTC is forced to withdraw its service from communities where it is frequently attacked, it is the residents who will be greatly inconvenienced. Are there community leaders in the churches and in NGOs who can exercise moral suasion over these misguided individuals?