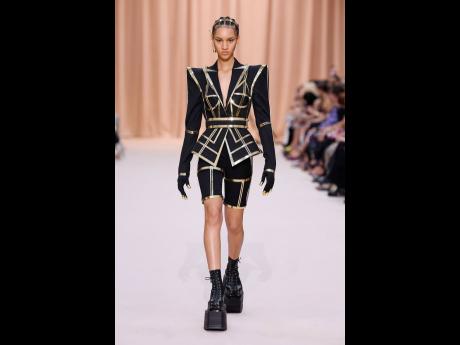 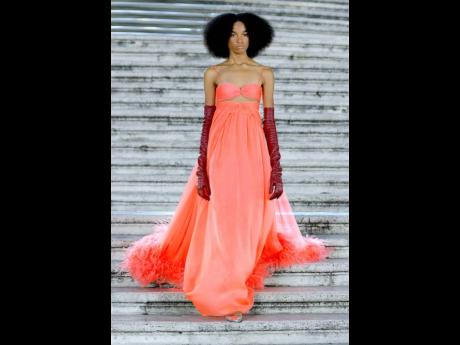 Contributed
Shantae Leslie walks the runway for Valentino in a peach gown.
1
2

By all accounts, the haute couture season in Paris was a huge success, and fast-rising stars, Shantae Leslie and Zan Hyde, made spectacular appearances.

Leslie, the 2019 winner of Pulse’s Caribbean Model Search reality TV series, presented magical high fashion for the famed Italian design house of Valentino in Rome, while it was an impressive couture début for agency colleague, Zan Hyde at Jean Paul Gaultier in Paris.

Selected among the world’s best models to wear stunning looks befitting their training and runway prowess, the Jamaican girls are blazing a trail simultaneously.

Already special because of the exquisite work that goes into preparing each look, couture is considered the highest artistic expression of fashion and this season’s presentation was heralded as one of the most outstanding yet. The industry’s most revered publication, Vogue, describes the fall 2022 collections as “spectacular!” The couture shows featured some of the world’s A-list celebrities of fashion, film and music — Naomi Campbell, Nicole Kidman, Dua Lipa and Kim Kardashian, to name a few. And as rave reviews came in, high accolades were given to the shows for which Hyde and Leslie were selected – Jean Paul Gaultier and Valentino. The Gaultier collection was designed by the prolific young multi-talent Olivier Rousteing of Balmain fame. And the transformative Pierpaolo Piccoli, who modernised the brand’s DNA and turned it into a billion-dollar company, continues to show his creative prowess at Valentino.

Hyde, who glided down the runway at Jean Paul Gaultier x Olivier Rousteing, was magnificent in an elegantly cut night-black short suit accentuated by sharp gold seams hitting all the right angles to celebrate a woman’s form. The belted jacket had a throwback feel of acutely angular shoulder pads, channelling a new space-age vibe. The shoes also made a huge statement and were signature Gaultier-styled, high platforms laced up ankle boots.

After her assignments in Paris, including shooting Lanvin, Leslie left for Rome by private jet with the select model set who would present Valentino. Strutting the runway in her first outing for the famed Italian fashion heavyweight, Leslie was fairytale styled in a stunning peach gown on the steps of the museum city, Rome. The teenager is no stranger to the high fashion, jet-set crowd as she made her explosive start in world modelling when she walked for the powerful Prada brand two seasons ago.

“It was great to be in Paris for the couture,” said the soft-spoken but articulate Hyde, who is reading for her bachelor’s degree at Howard University in Washington D.C. “Being able to walk for JPG as my first high fashion show was amazing, I loved how fierce my look was, and I did my best to represent my agents at Select, Elite and especially Pulse family.” Shantae was as excited about taking her first steps in Valentino, “I was over the moon,” said the shy teenager.

Pulse’s director of fashion and lifestyle, Romae Gordon, was pleased to have the duo making such an important impact especially as the fashion weeks get back into full gear post lockdown. “We are proud of Shantae and Zan; they were placed first and second in our CMS TV series in 2019. Both made it very difficult for the judges to select the winner as they were highly competitive and showed star qualities all throughout CMS... . We expect great things from Shantae and Zan.”