Nickeil Edwards focused on the ‘sweet tings’ in life

Talks starting an entrepreneurial journey as a sweetie vendor 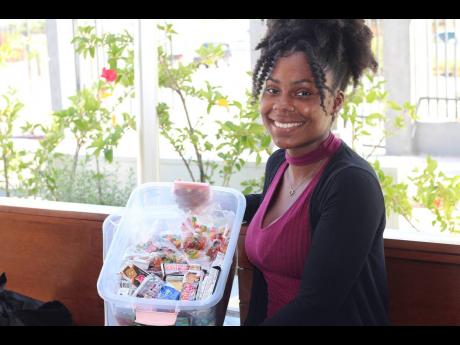 Stephanie Lyew
With hopes of eventually fulfilling her dream of becoming a nurse, Nickeil Edwards is growing her business one sale at a time. 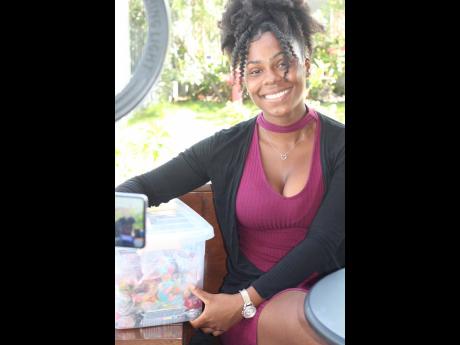 After an attempt to pursue nursing school not going as planned, Nickeil Edwards moved from Manchester to Kingston with a visual map of where she was going and nothing but a dream in her pocket.

She scored a job in the telecommunications customer service sector — a call centre — and in no time received a promotion.

For a born-and-raised country girl, she told Living, “it was one step closer to finding a new path.”

“There was the financial ‘situation-ship’ that played a role in everything, and also, I didn’t feel confident to pay to study something else that deep down, I did not want to do,” Edwards continued.

She shared that instead of staying in Mandeville, where she was born and raised, she moved away and started a new journey.

“That was me partially thinking what other persons would think and say,” shared Edwards, whose TikTok had many social media users absorbed earlier this week when a video of her selling assorted sweets and snacks in Half-Way Tree and downtown Kingston went viral.

“Ironic, isn’t it? Someone who cared about what others thought of me not taking my studies further or going back to school here selling sweetie in the streets of the capital city. I was already making sales in my environment, but I chose to take the business wider, on the road, during my lunchtime or on the way home, but on my day off, I decided to record myself doing what I do,” she said.

The idea was not wholly new to Edwards. She said that her business-minded sister, Marika Morgan, inspired her to consider sweetie-selling a side hustle.

“She (my sister) is just an overall go-getter. And about a month ago, my cousin, who is invested in NFTs, [single-handedly] changed my mindset and perspective on life. He opened my eyes to why it’s imperative to focus on the positive things in life and really emphasised the benefit of being grateful,” Edwards said.

She added, “All in all, my entire circle, whether family or friends who became family, have been supportive. My mother is happy to know I’m working hard. No one has judged me … they just want to know I’m safe. They all motivate me daily to be the best version of myself.”

In addition to the sweetie-selling venture, which Edwards has called Sweetie Tings, the 21-year-old also has Hair Tings, a hair accessory and hair-training supply venture she launched during the pandemic.

“Though I continue to gain experience and knowledge in customer service, working for someone else, other than myself, is not the way forward that I envision for me. I want to grow my business.”

For Edwards, it’s one step closer to becoming a “girl boss,” and the concept of living from pay cheque to pay cheque does not cut it. She has not given up on the dream to become a nurse but believes it will manifest itself in her goals to help others, the way she experienced a helping hand in her teenage years when she was diagnosed with scoliosis.

“The Duncan Tree Foundation donated the rods and bolts for the corrective surgery. The nurses took the best care of me, and that’s where I became interested in the field. I was 15 then. It remains a dream but can be made into reality, but I’m seeing other opportunities and careers that I’m intrigued by becoming something greater,” she said.

“Sweet Tings and Hair Tings are relatively small businesses, but me being passionate about helping others is big. People have already recommended even me making sweeties and selling those, but I haven’t done enough research on that. The aim is to inspire others the way I’ve been inspired … it doesn’t matter the expectations people have of you. It doesn’t mean you can’t do more,” Edwards continued.