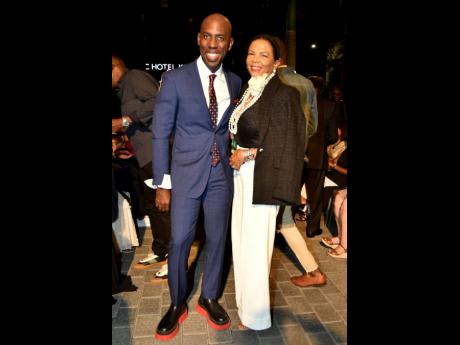 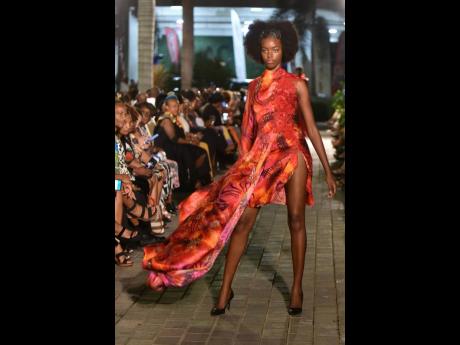 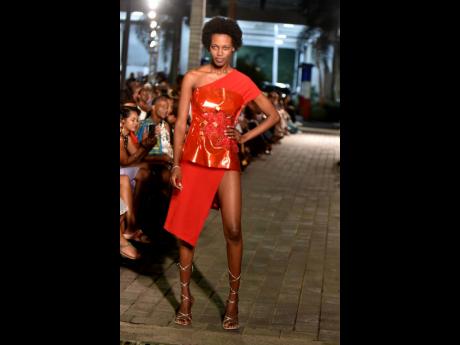 It was Collection Magnifique by designer Elliette Lesuperbe from Guadeloupe that closed last Saturday’s La Hot Couture, held at the AC Hotel Kingston, and hosted by SAINT International in collaboration with the 2022 staging of A Touch of France.

Speaking with The Sunday Gleaner, the French-speaking Lesuperbe shared in English that she was happy to be showing on the island again.

“I have been coming to Jamaica for 18 years. I actually had my first show here in Jamaica when I just got into fashion. I fell in love with the island and the people. They are similar to people in my home country — very resilient and hard-working. I could not believe the size of the turnout, but I am happy so many people came out to see our designs and I am grateful,” she said.

Her collection opened with SAINT International model Kai Newman, the new face of Prada’s Fall/Winter 2022 global advertising campaign, who says she just had to be here for La Hot Couture.

“I have not done a runway [for] Deiwght since the pandemic. It means a lot just to be back in Jamaica, doing it for Jamaica. I had to fly in for the show,” she shared.

As for her newest campaign, she revealed that it feels like a rebirth.

“I am so excited to be a part of Prada’s campaign. It is very limited for black girls, so it means a lot to me. It has been quite a journey. I started in 2015 and went off in 2019 to have my baby and then I just started back in March. I did not expect so much, but the comeback means a lot. I started opening shows, then getting the Prada campaign, it is everything,” Newman continued.

For younger, aspiring models, she urges them to be steadfast in the pursuit of their goals.

“Focus! Put your life first. Focus on your dreams and passions and know what you want. You have to believe for it to happen, and once you do that, it will happen,” said Newman, who was notably discovered by SAINT Chief Executive Officer Deiwght Peters walking on the streets of downtown Kingston en route home to Allman Town after a visit to the dentist in 2013.

The then 16-year-old Newman would subsequently win SAINT’s Female Fashion Face of the Caribbean competition the same year and have a breakout season on the international runways walking for more than 23 designers and fashion houses, including Marc Jacobs, Gucci, Hermes, Calvin Klein and Tommy Hilfiger. She landed advertising campaigns for Ralph Lauren, River Island, and Benetton and shot editorials for Vogue, Allure, and W magazines. Newman would take a three-year hiatus from the modelling business to become a new mother to daughter, Zehirah. Still, the model phenom came roaring back in March this year with an exclusively booked runway appearance for Prada and an impressive runway showing across the world’s fashion capitals in New York, Milan, Paris and London ensued with catwalk turns for Valentino, Bottega Veneta, Loewe, Burberry, Marni, Jil Sander, Tory Burch, Tom Ford and a host of others.

La Hot Couture had been on a three-year hiatus due to the pandemic. Therefore, a runway show under a cool, starry night in the capital city was the perfect way to welcome what is dubbed by Peters as the ‘return of fashion’.

“Fashion is back!” Peters declared to The Sunday Gleaner.

“For those who didn’t make it, the reality is, you missed the comeback show of the fashion season. You missed a lot. This is the biggest fashion comeback of the last five years, perhaps the last decade. We were literally on lockdown for the last two and a half or three years, and when you find that an event like this really happened and it got on as spectacularly well as it did and all the people who turned out from across the country and the world, it was an event not to be missed, and if you missed it you should regret it because believe it or not, it had all the elements of a grand international spectacular, and that is all that it was and more,” he continued.

Pieces from Heather Laine opened the show. She showcased her Christmas looks in the holiday colour scheme of green, red, and black. She began with her white pieces and displayed her 100 per cent cotton African Collection. One signature feature of her designs was the use of flowers in fabric prints and appliqués. She also paired the designs with authentic Ethiopian accessories. The beautiful and eye-catching designs oozed luxury, style, and comfort. Following Laine’s pieces were avant garde designs from students of the Edna Manley College of the Visual and Performing Arts. From the usage of colour and fabric and sheer originality, it is clear that the future of fashion is in good hands.

La Hot Couture marked the end of the 2022 staging of a Touch of France, which is done to display the rich French culture on the island. Pierre Lemaire originally conceptualised a Touch of France. SAINT International has been partnering with the event for over two decades. Over the years, it has grown into a global event, according to Peters.

“You know we had 600 chairs laid out and all of them were full. But beyond that, we had almost another 600 standing. People were just coming in from all angles, and what was also just really good, is that it was a global affair, and that is what we really appreciated. We had the US ambassador; we had the ambassador from France and from Germany; we had that global presence,” he said.

“Touch of France La Hot Couture was the perfect platform for the comeback of fashion, and we really put a lot into it. A lot of our older models came in, and we wanted it to be that kind of celebration to say look, we really made it on the other side, so let’s look back, but at the same time, let us look forward. And that’s what it was,” Peters continued.

For him, the highlight of the evening was the blending of cultures, especially as they came together in fashion.