The pros and cons of weed decriminalisation 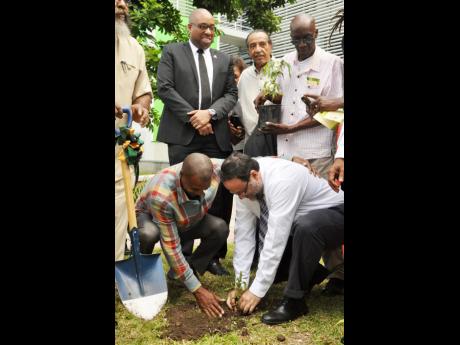 JAMAICA'S FIRST legal marijuana tree was planted at the University of the West Indies (UWI), Mona, on Monday morning.

This comes as the UWI and the University of Technology (UTech) have been granted licences by the Government to grow and use marijuana for research. The licence also gives both universities the permission to subcontract local marijuana farmers.

At the launch event for the symbolic planting of Jamaica's first legal marijuana tree, the Government urged the university to engage small farmers to help satisfy any residual demand that might arise during research. In collaboration with the Scientific Research Council, small farmers will be granted licences to grow and sell marijuana directly to the universities for research purposes.

Along with the scientific research, solid international business and financial models are being developed for the local industries within the global context. Several industries are expected to benefit from marijuana cultivation and research, including medicine, food production, transportation, manufacturing, tourism, energy and the financial sector.

Though not yet legal, marijuana is now decriminalised in Jamaica and the law is in effect. Each household is allowed to grow five plants for personal use and personal possession of up to two ounces will only attract a fine of $500. The police can no longer lock up anybody for an unlit spliff or quantities of marijuana less than two ounces. They have been urged to be very lenient where this is concerned and use their discretion. Rastafarians can now use marijuana for religious purposes without worry. The struggles of the past are over and Rastas can no longer be persecuted for their religion.

Decriminalisation policies will prevent overcrowding in jails and backlog of petty marijuana-related cases in courts. It will also save the Government time and money by reducing the amount of persons in jails and prisons for marijuana-related incidents. Citizens who use marijuana are no longer considered criminals and can now be hired by companies, which increase their career prospects. Police focus and resources can now be redirected to real crime. Tourism is expected to increase as tourists can now come and use marijuana without the fear of being classified as criminals. A framework for a medical marijuana industry can be established.

If the police are strict in enforcing fines for amounts under two ounces it may create some problems. Attempts to enforce public intoxication restrictions or driving under the influence of marijuana restrictions will increase the backlog of court cases and defeat the original purpose, and an agency established to handle these cases will increase bureaucracy and more than likely will be inefficient. The police should be penalised for prolonging petty cases and wasting the court's time.

the universities' research and product development.

What does it mean for the economy?

Jamaica is finally moving in the right direction. The Government has been objective, thus far, in its approach to set the platform for an equitable marijuana industry in the country, which is commendable. The right laws and motivational strategies are being employed to increase the livelihood of the country. Jamaica has a bright future; small farmers should prepare themselves for production, while investors should start thinking long term as we focus more on enhancing product development rather than law enforcement.

The UWI and UTech must

collaborate and share ideas on research and development on how to move the industries forward to benefit the country. The universities should also be granted the power to outsource research ideas, not just the cultivation. A research centre can be created where non-university researchers can display and improve their ideas to benefit everyone.