Graduation 2015: You are Perfect, Believe It, Ambassador Marks 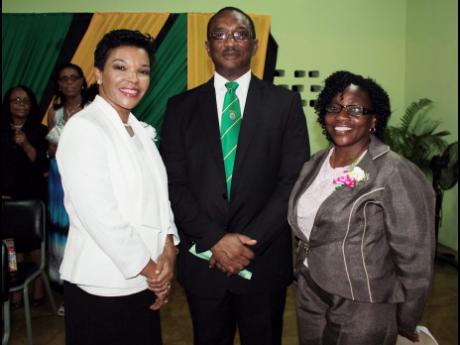 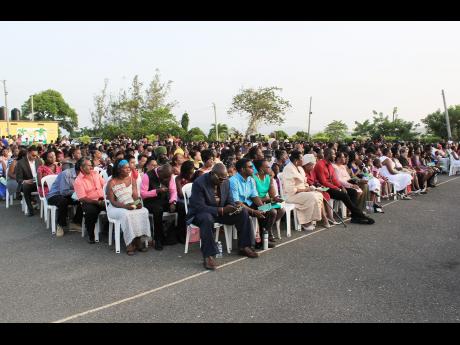 Gleaner Photo
A section of the audience at the St Mary High School graduation ceremony. 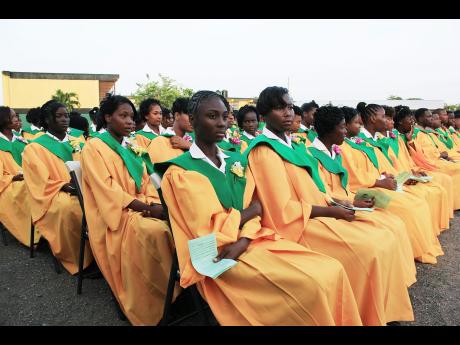 Orantes Moore
A section of the graduating class. 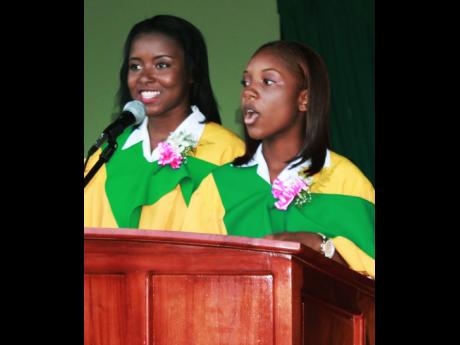 Guest speaker, Paymaster CEO, Ambassador Audrey Marks, told graduates to be audacious with their ambitions. Calculate the long-term impact of their decisions and exercise the option of self-employment.

Speaking with The Gleaner after the ceremony, Ambassador Marks, who is from St Mary, said young people in Jamaica were in desperate need of support and encouragement. She said: "I'm here because it's my responsibility to give back, especially to my parish."

"These children are at a vulnerable age and I thought if I could impart something from my experiences that could help change, transform, or guide their lives going forward, it would clearly be my responsibility and pleasure to do so.

"I consider myself a patriot and can see the problems in Jamaica, especially with our youth. I see how they are being targeted for activities that are not right and cannot lead to the development of our country. So it is our responsibility - all of us who care about the future of Jamaica - to start investing, mentoring, and helping our young people on the right path."

Describing herself as a 'serial entrepreneur', Ambassador Marks who worked while pursuing university studies told graduates that as her first business of selling rum to the United States, the United Kingdom, the Caribbean, and Canada expanded, it became hard work to lug suitcases of rum, sometimes with a substantial amount of breakage if they were not packed properly.

"The only saving grace was that although the Canadian customs could charge for every bottle, most of the time they allowed free entry. These were the late '80s to early '90s before 9/11, when travel and security measures were far less restrictive, she said."

"I had become such a regular Friday evening visitor, I was mostly just waved through customs. On one such occasion, a friend picked me up and noting my quick exit through customs, he seemed very interested in my methodology. After answering many questions, he finally came to the point, and told me I could make thousands of dollars without lugging all those boxes, if I would just take an occasional package of drugs from Jamaica. While being initially shocked at the suggestion, on hearing the amount of money I would earn for doing far less work, I listened."

Ambassador Marks told her eager audience that that night she thought of what she could do with all that money but also started to think about what would happen if she got caught doing something that was illegal. She had a sleepless night because of the battle of the value system she had been raised with versus the desire to have easy riches.

"Years later, I was asked to serve my country as the Ambassador to the United States. In my initial briefing, I was told that a very detailed due diligence on my background would be done and asked if there was anything that could be found that I would wish to disclose from now. I did not have to give it a second thought, the answer was an easy no because I had asked myself that question many years ago," she said.

She reminded the graduating class that although times are difficult and they might be approached by unscrupulous persons to get involved in illegal activities such as stealing, scamming, drug running, gun running, was contrary to giving themselves the opportunity to live out their most audacious self without fear or favour.

"The most important things to take with you out into the world after you leave this school are your values. You know your morals and your understanding of right and wrong. You must learn to trust yourselves.

Jullett Frazer-Sadaar, principal of the school said the last 12 months had been tough, but rewarding for both the students and faculty. She explained: "It has been challenging but our team has been up to the task. Today, we have a group of graduates who are appreciative and full of promise."

St Mary High's chairman, Dr Dane Levy, added that the school would continue to develop, nurture, and encourage the students as they intend to be the number one school in Jamaica.