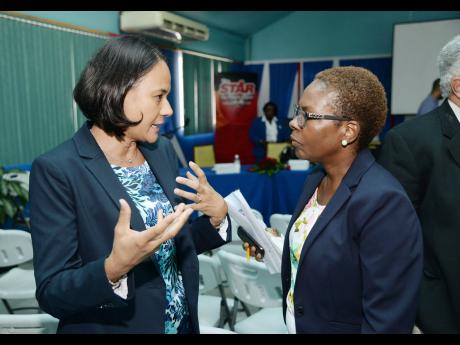 Managing Director Christopher Barnes said the company is now reaping the rewards for investments made in efficiency improvement projects in recent times. He said most of the initiatives were geared towards assisting with the Gleaner's strategic goal of transitioning to a digital environment. Barnes said in pursuing this goal the Gleaner team made necessary investments while prospecting for revenue.

"This company is making a transition to a digital environment, we are a multimedia company that operates in print, online and (on) radio. In order to drive our digital revenue growth we increased our promotional efforts in this regard," he said. Barnes reported on several initiatives, including online subscriptions, more in-depth analytical news treatment, business news and the installation of an integrated platform for content management.

The managing director said other initiatives, including reduction in the web width of the newspaper, energy savings and mechanical and process improvements had resulted in significant savings. Cost of sales accordingly declined from just under $1.9 billion to nearly $1.75 billion. Total costs declined by $92 million. At the same time total revenue dipped $18 million from $3.338 billion to $3.320 billion.

Net profit after tax was $ 181 million; more than double the $86 million for 2013. Return on equity more than doubled from three per cent in 2013 to seven per cent in 2014. In responding to a question from shareholder, Arthur Ellison, on the contribution of online to the business the managing director said that while the online business accounts for a small percent of total revenues it was making a significant net contribution to profits. Long standing shareholder Orrett Staple commended the management team on its stewardship of the company over the past year and posed several questions on the financial statements to which the Chairman and Finance Manager responded.

Board Chairman Oliver Clarke, in commenting on the Gleaner's performance, said the outcome of the year was a product of the wealth of talent that exists in the company at all levels and also on the Board, including recently appointed director Elizabeth Betty-Ann Jones and Vice Chairman Joseph M Matalon, who, with Winston Dear and Douglas Orane, were among directors retiring as per company articles and re-elected. The Chairman also commended shareholders for the faith they have reposed in the Gleaner and invited them to directly contact management on an on-going basis to make their objections and suggestions for improvement known.

Other activities during the AGM included well wishes for retiring long service employee of 46 years, Margaret Nembhard, and a presentation on the company's most recent interactive initiative, Myreport, a concept which invites readers to contribute their own community and other reports to the newspaper.