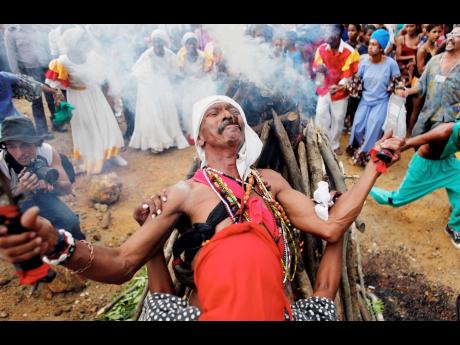 AP
A Santero priest prays during a Santeria ceremony in honour of slaves rebelliousness in Cuba. 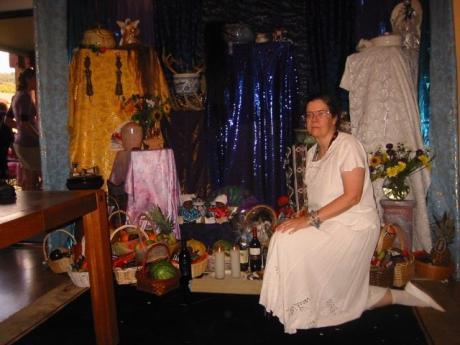 "He who has not forgiven an enemy has not yet tasted one of the most sublime enjoyments of life."

In the 1987 film, The Believers, viewers were rattled and terrified by murderous, gory scenes. Since then, religious scholars and anthropologists have struggled to set the record straight, fighting tooth and nail against the twisted Hollywood sensationalism that tarnished the image of Santeria, an Afro-Cuban religion.

One such scholar and initiate is Dr Mary Ann Clark. For decades, she has exhaustively taught the tenets of the faith, challenging those bent on vilifying a spiritual tradition that she calls sacred, theologically sound, and complete.

Clark lectures at Yavapai College in Prescott, Arizona, and has authored seminal works, such as, Santeria: Correcting the Myths and Uncovering the Realities of a Growing Religion, and Where Men and Wives and Mothers Rule: Santeria Ritual Practices and their Gender Implications.

She was initiated in Houston, Texas, where there is a large Hispanic presence. But there is an impressive mix of santeros or practitioners that catch the attention of onlookers.

"Many are born into the religion, while others have had personal experiences and have been called by the orisas, like myself. Some attended healing services and have experienced the richness of its services," said Clark as she explained the religion's eclectic group of worshippers.

She noted that while healing is a point of gravity in the faith, it should not be construed only as curing diseases or ailments. "Santeria, unlike faith-healing religions, will advocate the use of modern medicine, depending on what is seen during divination. Healing in Santeria has more to do with healing of the soul."

Clark refers to Santeria as a variant of the Yoruba traditions that is practised in Brazil, Haiti, and Trinidad and Tobago. They all pay obeisance to the same orisas or Yoruba gods.

Each orisa has its distinctive colour, food, songs, music, and connection to natural phenomena. And although, there is Roman Catholic influence, she dismisses the commonly held academic belief that Santeria is a syncretic religion.

"In its early history in the region, practitioners did appropriate some facets of what was around them, for example, religious holidays, but they did not incorporate Catholic saints.

"You may see Catholic images in a Santeria shrine, but you may also see images of Buddha and other religious icons."

She referred to cultural melange as "decorative displays" and argued that, in a ritualistic setting, Santeria remains distinctive and unique with its own cosmology, theology and philosophy.

Clark has long fought historical distortions and prejudices against her faith but remains understanding and conciliatory. "Everybody believes that another faith practices some form of superstition. When Western churches pray for rain, that is acceptable; when the Native Americans do the same, it is decried," she said

And of offerings to the orisas - the most misunderstood practices of the religion, she detailed: "Sacrifice is the exchange of energy or gifts between orisas and devotees. Common offerings include cool water, fresh fruit, cooked food, pieces of cloth, and other types of manufactured goods."

She continued: "Sacrifice can also include acts such as wearing white clothing for a certain number of days or participating in a ritual. Blood, as the carrier of life energy, can also be offered. Commonly, barnyard animals are used and the meat is eaten by the participants, so the animal is, in fact, shared with the orisas.

She later described the emotional, mental and physical demands of becoming an initiate; the seven days of sequestered fasting and lying on the ground as if to absorb the energies of Mother Earth.

Clark made mention of the novitiate period and the spiritual prescriptions after initiation, that is tantamount to a grooming period, from spiritual infancy to maturity.

According to Clark, religious austerities and the close-knit, family-like bond among santeros minimise charlatanism and those who are bent on preying on the unsuspecting for monetary reasons.

"It is a lifelong commitment. The orisas are put in your head during this ritual. You can repudiate the religion, but like a priest who will always be a priest after taking his vows, a Santeria initiate is always a child of the orisas."

Unlike Christianity, Islam, and other mainstream religions, a devil does not exist in Santeria. "Yes, evil things happen and you could say that some of the orisas misbehave, but we don't have an anthropomorphic entity, per se."

On eschatology, Clark offers that the world is essentially a good place; that we are here because we have accrued some good karma in our past; that we have earned a place on earth, after our souls have rested for a while.

"Santeria upholds that reincarnation is a reality, but this doctrine is unlike that of Hinduism and other eastern philosophies. If you have lived a good life, you return, but your soul is destroyed if you have been an evil person."