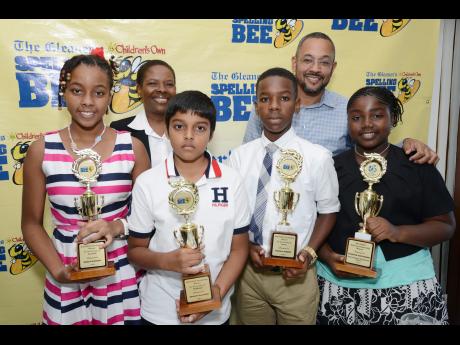 On June 17, 2015, Nickolai Roberts received the perfect birthday gift when he learnt his results in the Grade Six Achievement Test (GSAT).

Roberts was among two other students who were recipients of The Gleaner's 2015 GSAT Scholarship Award, in addition to one student who copped the Editor's Choice Award.

The former Port Antonio Primary School student, in sharing his GSAT experience at the awards ceremony held at The Gleaner's offices in downtown Kingston on Tuesday, said he was grateful for the recognition and would continue to do his best.

"The day GSAT results came out, June 17, 2015, was also my birthday and when I heard my grades I ran faster than Usain Bolt. I couldn't have received a better gift," he recalled.

"I was just running over the place in no particular direction, feeling so happy and overjoyed. I remember the first day of the exam I was so nervous, however it is a wonderful feeling in the end," he said.

His mother, Andrea Roberts also shared that it was a tough journey balancing motherhood and her job, however she had no regrets.

"I am partly a single parent and it was very challenging in terms of time management due to my job. There were times I had to be in Kingston and then had to rush home in Portland to assist him with his school assignments," she said.

"I am also big on ensuring that children are properly fed so I made sure that while studying he had his warm meals waiting for him. My life was all about him and my job. It was tough but I have no regrets and I am truly grateful to The Gleaner Company for this recognition," Nickolai's mother said.

Roberts, whose GSAT average was 90.5 per cent, will be moving on to The Titchfield High School in Portland.

Gleaner Managing Director Christopher Barnes said the company was committed to doing its part to enhance education in Jamaica.

"Days like today are always good days because we get to see the people we help to further their education. These students are among the brightest and we are really happy that we were able to assist them in their transition to high school," he said.

Barnes added: "What I am also happy for is that there was a good representation of males here today as this is a current struggle in Jamaica. We would like to see more boys excelling at a satisfactory level."

He also urged citizens to do their part in ensuring that students garner a top-class education.

"Parents have to get involved, the teachers need to get involved and the students themselves must do their part. As a company we continue to do the CSEC (Caribbean Secondary Education Certificate) and GSAT publications all with the aim of doing our part as a community with education," he said.