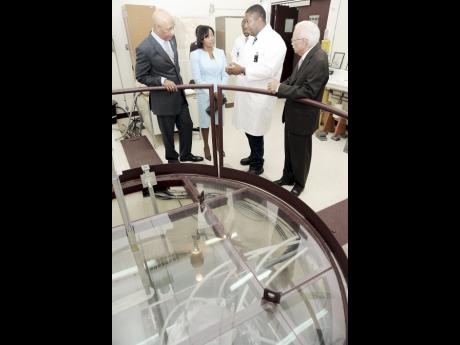 Rudolph Brown
In this Gleaner file photo of March 22, 2011, Governor General Sir Patrick Allen and Lady Allen (at left) are advised about the reactor at the International Centre for Environmental and Nuclear Science by then senior research fellow and chief reactor operator Charles Grant (second right). At right is Professor Gerald Lalor.

Director general of the Inter-national Centre for Environmental and Nuclear Sciences (ICENS), Charles Grant, has lauded the introduction of the nuclear bill which was passed in the Senate last Friday.

Speaking with The Gleaner, he noted that the bill brings Jamaica in line with international standards.

"About two or three years ago, we had an issue with the oncology unit at Kingston Public Hospital ... based on the fact that we didn't have regulations; international standards now say that you should not do business or trade radioactive sources with countries that don't have regulation. So, us having regulations now permits us to trade with everyone else in the world," he explained.

"This legislation will contribute to health and the medical profession because the biggest users of ionising radiation would be your X-ray labs, cancer treatment centres, and we also use it in research."

Grant, who was instrumental in providing input to legislators on the bill, also outlined implications for research activities at ICENS.

"We have always been reviewed internationally by the Atomic Energy Agency, so every couple of years they come down and review our operations to make sure we are compliant with best practices; but now we will have a local regulator that will come in and inspect and ensure that we are operating in the way that we should," he said.

He went on to indicate that the passage of the bill would allow the centre to carry out upgrades to its facilities.

"We will be able to extend the life of the reactor, acquire new equipment and other upgrades, and make changes to the building that will improve our efficiency; so the amount of research that we will be able to do will increase for sure," he added.

The nuclear scientist pointed out that the centre has been doing impactful research on trace elements in the soil and their impact on health. The upgrades that will be instituted will allow for this and other research to be intensified.

While the bill in its current form prohibits the building of a nuclear power plant and does not, in substance, deal with the issue of nuclear energy, Grant is hopeful that it will serve as a platform for the development of a nuclear industry in Jamaica.

"It's the first step. We now have a regulation, so if we wish to go to nuclear power we would have to take the other prerequisite steps, but we would have to increase the number of persons that are involved in this industry and increase the regulatory body. The body that we have now is not sufficient to take on nuclear power. I would certainly like to see a small nuclear power plant here because I believe it's a very efficient way to produce energy and is quite cost effective. One nuclear plant is more than Jamaica needs; that would power us completely," he said.

"He is a great man. The fact that we have this bill going through now is due to him. He had the vision to bring this type of technology to the country, so I only have good things to say about Professor Lalor; the man is a visionary. His vision of bringing nuclear to Jamaica is still here, still alive and just goes to show that 30 years on, what he believed in is still true today, " he said.