Dave Brown: palaeontologist in the making 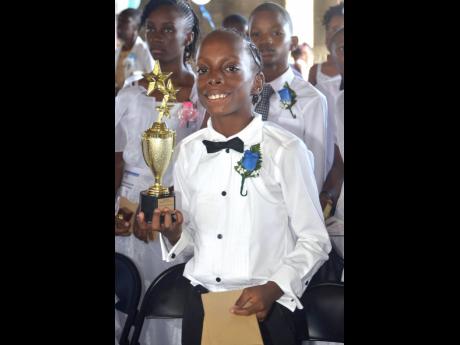 Dave Brown Jr holds one of the trophies he was presented with at his graduation ceremony.

With an average of 95 per cent in the recently released Grade Six Achievement Test (GSAT), Dave Brown Jr graduated at the top of his class at the Lyssons Primary School in St Thomas.

Dave Brown Sr told The Gleaner that his son's abilities were foreseen by his late grand-mother Jacqueline Barnes.

He reminisced on a time when Dave impressively delivered a vote of thanks at a carol service when he was only three years old.

Though he was not placed at Campion College, which was his first school of choice, Dave said he is extremely happy to be going to Ardenne High School come September.

"I'll try to do my best at any school I go to," he said, adding that he is prepared to receive every award that the school has available.

The preparation Dave put into GSAT resembles that of an undergraduate student.

"I studied a lot and tried to dedicate 100 per cent of my time and energy into trying to pass. I went on the Internet and searched various sites and read all my books," he said.

The hard work paid off as Brown reaped the fruits of his labour, collecting awards for perfect score in mathematics, science, social studies and language arts. He was also presented with the Principal's Award.

Dave's dad told The Gleaner that the principal had challenged his son prior to the grade six tests.

"She made a bet with him that if he could get three 100 per cent, then she would give him a gift. When he got four, he went and reminded her of the promise."

Principal Yvette Bonfield-Beecher describes Dave as a hard worker, who is very humble and, at the same time, confident. She said he is "quite rounded" as his participation in sporting activities does not hinder his academic performance.

He was also awarded with trophies for good behaviour and track and field.

With hopes of becoming a palaeontologist, the Lyssons Primary Student of the Year 2015 explains that he is especially interested in learning about dinosaurs.

"It will be educational and

I think I can make good discoveries."

Though Dave has big dreams for himself, he is far from being selfish. His advice to his younger peers had his father beaming with pride.

"They should study and try to reduce the time spent playing. Try to dedicate most time

and have the proper attitude. Because if they don't have the right attitude, then they won't make it far or even close to where they want to go," advised the 12-year-old.