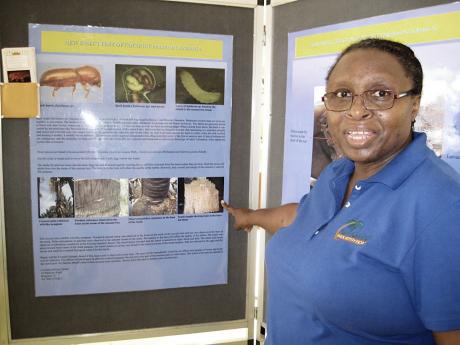 Millicent Wallace, director of research at the Coconut Industry Board explains the new disease affecting coconuts.

The Coconut Industry Board has embarked on a public-education campaign to sensitise farmers about a new threat to the coconut industry. The bark beetle, also known as the coconut shot-hole borer, is an insect pest of wood that was found in Hayes and Corn Piece in Clarendon, Ramble in Hanover and Pemderton Valley in St Mary.

It has also been identified in Portland and St Thomas.

Millicent Wallace, director of research at the Coconut Industry Board, said it is the first time that this pest is being identified in coconut trees in Jamaica.

"This pest has the potential to damage seed nuts and the planting material for farmers. It also has serious implications for the coconut industry in Jamaica.

Wallace, who took The Gleaner on a tour of the Coconut Industry's booth at the Denbigh Agricultural, Industrial and Food Show, revealed that a sample of the insect was collected and placed under observation in a lab where it was found that it is sensitive to light, shock and heat.

"It bores holes in the trunk as well as in the nuts and all the water drains right out," she said, noting that if the pest is identified in the nuts, all the affected nuts should be picked and burnt and the tree sprayed. She noted that if it is found in the bark of the tree, it is advisable to cut down the tree and burn it. "Do not remove infested nuts from the trees and send elsewhere, as this spreads the infestation to other farms," she warned.

So far, the Coconut Industry Board has done several surveys and has identified the areas for great focus. Insect traps have been imported in an effort to control the bark beetle infestation.

"We theorise that it is the severely dry conditions that have caused this insect to infest coconuts as they look for more hosts, because it has been identified in other crops before, but not in coconuts."