Dreams of an August Town rebirth 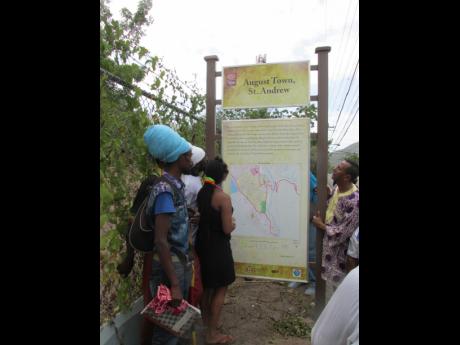 Paul H. Williams
People read a newly unveiled storyboard at Bryce Hill. It is hoped that knowledge of the story of the historic town might might change the attitude of the residents of August Town and the image of the Eastern St Andrew community.

'I will not be caught dead in that place', 'Dat deh place dung deh soh, no sah', 'It too volatile, no way' and 'Anything can happen, just so, and yuh dead' are some of the utterances you might have heard about August Town, situated in eastern St Andrew.

Formerly called African Hill, Free Town and Pumpkin Hill, and named after August, the month of Emancipation in 1838, it has evolved from a village settled by people who used to work on the Hope, Papine and Mona plantations, to a throbbing inner-city community where crime and violence have compromised its historical significance.

It was made even more famous by Alexander Bedward, firebrand Revivalist and spiritual leader of the Jamaica Native Baptist Free Church. With his millennial message and strong emphasis on spiritual healing, Bedward, born in 1859, attracted a huge following.

He was arrested once for sedition and released, but in 1921 was put away in a lunatics' asylum where he died in 1930. His remains are in the Bedward Cemetery at August Town.

The story of August Town evolved around Bedward's great renown. But with the death of the elder Bedwardites and the emigration of the descendants, the place that people would go to for healing became a place from which people would eventually flee to seek refuge elsewhere.

The image of the town, consisting of Greater August Town, Bedward Gardens, Hermitage, Goldsmith Villa and African Gardens, has been tarnished by negative media stories and personal anecdotes. And over the years, knowledge of its volatility has grown to supersede that of its historical importance.

Lloyd Henry, born 1941, whose grandparents were Bedwardites, grew up in August Town when people lived as one, he said. Touch one, and you have to touch all. Then partisan politics and gang warfare intervened and shattered the unity bequeathed them by their ancestors, and obliterated the progressive and empowering messages of the Bedward movement.

"That is the thing that mash up this community," Henry said, and he blamed the youth. Yet, he's proud of the historical importance of August Town, and will be buried there. His spot, he said, is reserved in the Bedward Cemetery, which has reached capacity. Burials are only for people who have reserved plots.

Another senior resident, Robert Campbell, who lives in African Gardens, believes that August Town has declined in terms of job opportunities, and this might have contributed to the tension that has gripped the town from time to time.

"I think that there has been some decay because there were many factories in August Town in the 1960s ... they are closed ... loss of jobs," Henry said.

Education, he thinks, is a solution, likewise the self-creation of jobs.

Yet, there have been efforts to change the image of August over the years with intervention at different levels.

The Sizzla Youth Foundation (SYF), led by president Miguel 'Sizzla' Collins, is one of the organisations bringing changes to August Town.

Last Saturday, in commemoration of the 177th anniversary of August Town and Emancipation, the SYF, in association with other organisations, had a brief ceremony after which four historical storyboards were unveiled. Another was uncovered the night before on a wall at the popular Judgement Yard.

Olimatta Taal, a member of the SYF, told The Gleaner that the reputation of August Town is actually worse than what the community is because things are changing.

She said she has seen growth and development, and the violence is abating as people are fed up. The SYF, she said, is working to create opportunities to foster healing, and to put in place development programmes and economic projects.

Also speaking with The Gleaner was member of Parliament for Eastern St Andrew Andre Hylton, who said, inter alia: "I want to call upon every citizen in August Town to be aware of their rich history and to take pride in their community. I would like to call upon all the youths of August Town to work together."

Brown said his interest is to develop the greater part of August Town, which is its history.

He believes that over the years, the youth have been robbed of their history and heritage.

He said the SYF is endeavouring to do what was not done before because the youth must know where they are coming from.

"It is very important because we see what it has done over the years, the crime and violence, because if you know what your heritage is ... you will know that you have a very rich legacy, so you wouldn't be destroying it ... From this point on to 2020, we are supposed to have a new August Town," Brown declared.

Inspector Michael Farquharson, in charge of the August Town police, said he believes the initiatives can work, while Kenneth Wilson, project coordinator with the SYF, said: "Today (last Saturday) marks the start of a new journey for this community ... We start this new journey, and today, we will begin to see a change in the greater August Town community."