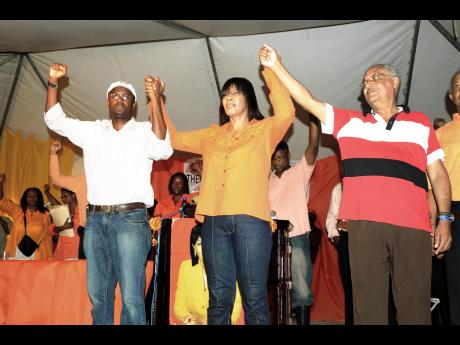 File
In this 2008 photo, People’s National Party (PNP) president Portia Simpson Miller stands with Ian Hayles (left), member of parliament for Western Hanover, and D.K. Duncan, MP for Eastern Hanover, during a PNP constituency meeting in Sandy Bay, Hanover. Hayles is challenging Duncan for the leadership of the region.

Two-time member of parliament Ian Hayles declared on Saturday that contrary to the wishes of some influential members of the People's National Party (PNP)'s hierarchy, he will be challenging incumbent Dr D.K. Duncan for the leadership of the party's Region 6.

Hayles, the member of parliament for Western Hanover, revealed his plan to a standing-room-only crowd of comrades at the Montego Bay High School auditorium in St James.

A delegates conference is scheduled for Montego Bay next Sunday to select the leaders for the region, which comprises St James, Hanover and Westmoreland.

"I want to say thank you D.K. Duncan for your service as the chairman of Region Six...After I win on Sunday, I am prepared to offer you the olive branch so that we can work together to win Region Six for the PNP," said Hayles.

"There is no need to fear my generation. The party must open up to the youngster like myself," added the 43-year-old Hayles, a one-time member of the Jamaica Labour Party.

Several speakers intimated that there might be some amount of discomfort in the PNP between the younger parliamentarians and their older colleagues, who are seemingly troubled by their quest to go after senior positions in the party. Raymond Pryce, deputy general secretary, said, however, there is nothing to fear.

"I want to make it clear that there is no war in the PNP between the younger and the older members of the party," Pryce said.

"D.K. Duncan was younger than Ian Hayles is today when he came to the fore in the PNP," said Pryce, dismissing the claim that Hayles is too young to lead the PNP's Region Six.

"There should be no difficulty in having Ian Hayles stepping up the ladder if the delegates want him to."

A junior minister in the Portia Simpson Miller administration, Hayles had a testy relationship with the late Roger Clarke which saw him being shifted from the agriculture ministry, where he was state minister, to the water ministry. He used Saturday's meeting to tell delegates that some of the people lining up behind Duncan wanted to see his back.

"Two years ago, Luther Buchanan (Minister of State for Agriculture, Labour and Social Security), told me to challenge DK Duncan for the leadership of Region Six but I told him that I was not ready... but I am ready now," said Hayles, to thunderous applauds. "When I met with Derrick Kellier a month ago, he said, "Hayles it is your time now... you back down twice for DK so is your time now."

Yesterday, Buchanan, MP for Eastern Westmoreland, denied making the comments attributed to him by Hayles.

"The truth will be revealed in due time," Buchanan told The Gleaner.

Duncan has been Region Chair since 2008 when he was elected unopposed. At the time, Hayles had signalled his intention to challenge for the post, but it did not materialise.

On Saturday, Hayles, like many councillors, constituency caretakers and members of parliament, who came out to support his candidacy, was respectful of Duncan in his pronouncements. He said that the eleventh commandment of the PNP states, "thou shall not speak ill of another comrade in public."