Farmers introduced to innovative way of beating the drought 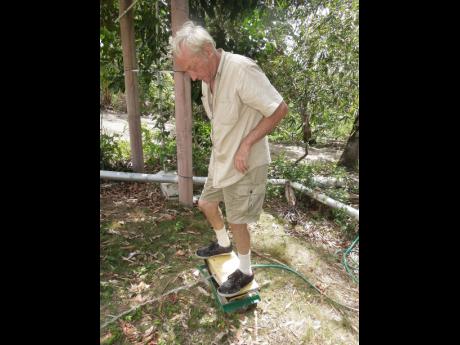 Contributed
Jock Brandis demonstrates how the pump is used. 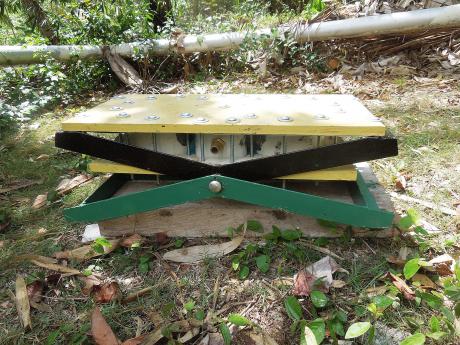 Farmers in the eastern end of the country were recently introduced to an innovative way of beating the drought which still has its grips on the country.

The Jamaica Sustainable Farm Enterprise Programme (Source Farm) in Johnstown, St Thomas, hosted a farmers' workshop which focused on simple systems that can help to solve their irrigation problems caused by the drought.

Jock Brandis, founder of the Full Belly Project, a non-profit organisation which designs labour-saving devices to improve the lives of people, was the main speaker. He introduced them to the system, but could not believe that this country of so much water experienced drought.

"I was so surprised when I got a call from Source Farm asking me to come up with a small, decentralised irrigation project. I said it was impossible for Jamaica to be experiencing a drought because nowhere else in the world has more perfect rainfall."

Brandis said the last 45 years have not been kind to the small farmers in Jamaica and the drought was their biggest issue.

The main focus of the workshop, therefore, was to educate farmers on a simple foot pump that is capable of pumping five gallons of water per minute and lifting water as high as 30ft - a machine that can be manufactured locally.

GETTING THE WORD OUT

"It doesn't take a lot of effort. When I arrived here I was introduced to two people, and together, in a short period, we were able to make 10 of these machines. After they were trained on how to use them, it was time to get the word out," Brandis told The Gleaner.

Farmers from across the island were in attendance. There, they not only learned about the mechanics of the pump but also of the importance of water insurance.

Brandis advised: "Farmers need to realise that every time they plant a crop they have to have some plan in place, so that in the case of a water crisis, the crop can be saved. It is as much an attitude of how you recognise there is a crisis and how you prepare for it, other than just crossing your fingers and praying that somehow things will work out."

Though farmers welcomed the notion of having a simple water pump, there are those who may not be prepared to put in the work needed to move the water. The machine is operated by standing on both sides and rocking back and forth.

Brandis explained that farmers would have a better bet if they used it cooperatively.

According to him: "The workshop was a great two-way communication for me because it allowed me to talk about simple and old-fashioned solutions which I think better suit small farmers than the expensive and mechanised diesel-operated systems. I wanted to give them the solutions that I found worked around the world and to find out about their farms and what their problems, and solutions were."

It was highlighted that there are no two farms in the world that are the same and every farmer has a slightly different problem. Thus Brandis pointed out that the pump may not solve all the problems, but if it served even 15 per cent of the farmers, then to him, it's a big victory.

Nicola Phillips, director of Source Farm, said that workshops like these happen every month.

"They are well attended because we're looking at the challenges farmers are having and then bringing in the appropriate people to provide researched and out-of-the-box ideas," she said of the farming organisation.