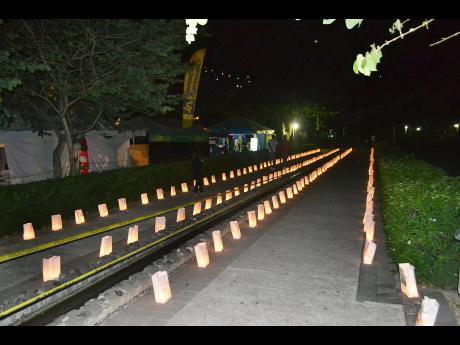 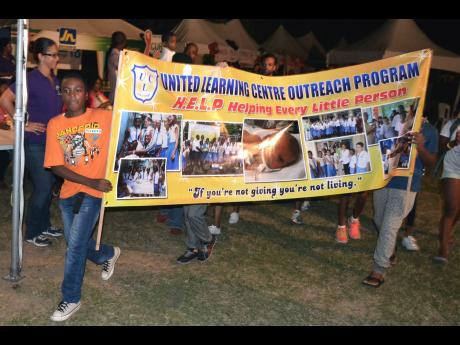 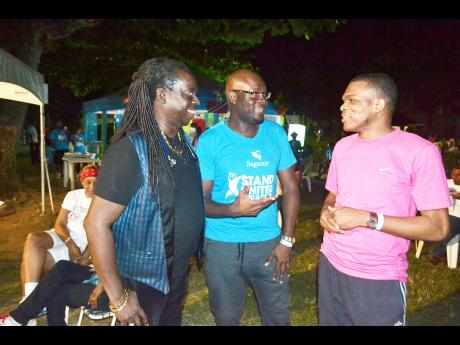 The turnout might have been lower than last year, and funds raised, when tallied, might have been even less than the amount raised in 2014, however, for sheer participation, there was more heart for the cause and it was pleasing to see the mix of people who turned out for Jamaica Cancer Society's (St Ann/St Mary Branch) 10th anniversary Relay for Life at Turtle River Park in Ocho Rios on Saturday night.

Quite noticeable was the group of grade six students from the United Learning Centre, supported by teachers Winston Moncrieffe, Maria Gabbidon, board chairman Dr Linton Francis and board members Maureen Charlton and Andrea Davidson.

The effort by the children, 20 of them, was part of the school's outreach programme, Helping Every Little Person (HELP).

The kids, for whom the plan was to participate for a couple of hours, actually volunteered to stay several hours longer, showing commitment beyond their years.

Such a kind gesture is nothing new for students at the school, who, over the years, have made meaningful donations to the St Ann's Bay Regional Hospital and to children in need, not just in St Ann, but in other areas of Jamaica, through HELP.

"It was the first time for the students. we thought the experience would help to build their awareness of what cancer can do and also to raise funds for the Cancer Society," Moncrieffe explained.

Moncrieffe said the kids had fun and were really impressed with the event as they did not expect what they saw and experienced in terms of the entertainment, the stalls and the number of youngsters like themselves who had turned out.

So enthusiastic were the children that Moncrieffe says the school expects to bring another group next year.

Health Minister Dr Fenton Ferguson and Junior Minister for Tourism and Entertainment Damion Crawford, who declared the event open, were present and walked a few laps of the park, accompanied by Madeline Whitter, chairman for the branch.

Manager for the branch Marilyn Williams expressed delight at the support by corporate Jamaica and spoke gleefully of the Jamaica Public Service, which initially had donated $175,000 to the cause but had doubled the amount by the end of the event on Sunday morning.

In terms of numbers, the Sagicor group seemed to have had the most persons present, with representatives from Sagicor Bank, Sagicor Investments and the brand's hotel chain, Jewel Resorts, combining for the occasion.

Regional manager Sagicor Bank, Northern, Oral Heaven, said it was pleasing to see the turnout at the event and the participation by the corporate entities.

For him, though, this year was a bit more meaningful than previous years as, he explained, cancer recently struck close to home for him.

"Sagicor always want to be a part of things like these and we have supported the Relay for Life, this chapter, every year, and it's a very good feeling," Heaven said.

"Also, this is close to home because just recently, my sister-in-law was diagnosed with breast cancer. She actually did the surgery and is going through chemotherapy, so this is dear to me as well."

The entertainment package was good, with several outstanding performances such as Bunny Rose from Mandeville, whose selections of golden oldies such as Satchmo's What a Wonderful World and The Bee Gees' To Love Somebody, was superb, so too Dr Roosevelt Crooks' rendition of To God be the Glory.

The Relay for Life, held annually, is the branch's main fundraising event as it seeks money to fund the various programmes that it offers.