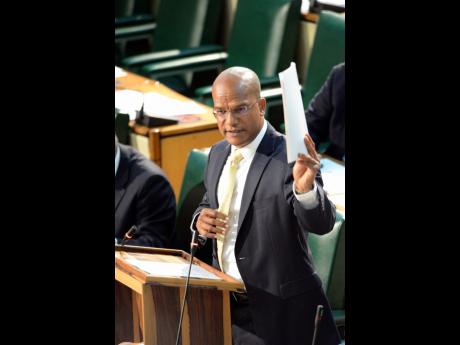 Jermaine Barnaby
Peter Bunting makes his address on the state of his Central Machester constituency in Parliament on Tuesday.

Central Manchester, according to Member of Parliament Peter Bunting, is on the way to becoming the knowledge centre of Jamaica and the best place in the mid-island for health care.

"We have a challenging environment, while we undergo the economic reform programme which we all know is going to bode well for the future. Notwithstanding that, we have not been sitting around, waiting," Bunting said.

"We have been moving to transform Central Manchester into a centre of excellence for the knowledge-based industry."

The MP, in his second term in Manchester, while making his contribution to the State of the Constituency Debate in the House of Representatives on Wednesday, said, on his advocacy, the Mandeville Regional Hospital has been designated a Type A facility, and that there is considerable private investment in health care in his constituency.

In addition, he said significant investments have been made in education with the construction of several classroom blocks in his constituency. That, Bunting said, represents transformational work he has been doing to build the constituency.

Specifically as it relates to health care, Bunting said, outside of Cornwall Regional, the University Hospital of the West Indies and the Kingston Public Hospital, there are no other Type A hospitals in the island.

Bunting told fellow legislators that he has been lobbying for the Mandeville Regional Hospital to be upgraded to a Type-A facility since been elected Central Manchester MP in 2007.

a type A hospital

"The current minister (of health) has agreed to designate Mandeville Regional Hospital a Type A in transition, and we have been able to advocate to (works) minister (Omar) Davis to transfer NWA property, which was adjacent the hospital, which was the only possible place for the expansion, and very kindly he consented to transferring that property," Bunting said.

He said $2 million has been set aside from his Constituency Development Fund to develop the plan to move the hospital to a Type A facility.

"When you sell this type of a plan, the private sector buys into it as well. We have seen a renewed interest and investment in Hargreaves Memorial Hospital, which is the second significant hospital we have," Bunting said.

Built in 1877, the Mandeville Regional Hospital is a Type B institution which caters to just over 1,000 clients daily.

The institution, which is administered by the Southern Regional Health Authority, was initially called the Mandeville Public Hospital. It was renamed in 2001.

Meanwhile, Bunting noted that the People's National Party (PNP), in its 2011 election manifesto, identified Mandeville as the information and communication technology (ICT) capital of the country.

"I am proud to say that the DBJ (Development Bank of Jamaica) has financed such a facility on Ward Avenue. The relevant ministries are in the final stages of getting an investor there and it has the potential to employ well over 1,000 people which would just about replace the employment lost to the closure of the bauxite plants at Kirkvine," Bunting said.

"We really hope that, in relatively short order, we will have the facility opened in Mandeville," he said.

The Government believes that ICT offers significant opportunity for employment.