A treat for the homeless 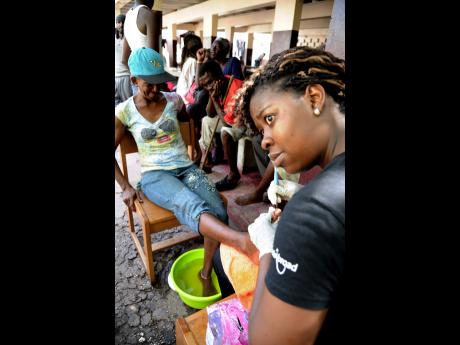 Forty-four-year-old Collin Taylor is now living among the homeless at the Marie Atkins Night Shelter on Hanover Street in downtown Kingston, despite a bachelor's degree in culinary arts.

As Jamaicans marked World Homeless Day yesterday, Taylor told The Sunday Gleaner that he was born in Jamaica, but grew up in Canada. He said he returned to the island some years ago to work, but later lost his job.

To compound the problem, he has no family here, and all of his savings has been spent.

"Honestly, it's God who has been keeping me," said Taylor.

"I have been here for the last two months and am hoping that I can get back on my feet soon. I have my degree and what not, but the challenge with being in Jamaica is finding a good job," added Taylor.

He was one of the persons at the Marie Atkins Night Shelter fÍted by the outreach team Projects Abroad Jamaica yesterday.

The team provided grooming and meals to the homeless in six parishes across the island.

According to Yunique Francis from Projects Abroad Jamaica, they do this type of outreach every month, but usually restrict their activities to Mandeville, Manchester, and Montego Bay, St James.

"We would provide food, grooming and care packages for the homeless, but because it's World Homeless Day, we decided to go large in six parishes doing what we are doing now," said Francis.

Between 200 and 300 homeless persons were treated yesterday, and Francis noted that many persons become homeless because of unfortunate situations.

"Homelessness is a global issue and it is increasing, so we have more and more persons become homeless and these are not just substance abusers, but those in unfortunate family relations, etc. The difference between a homeless person and you and I is that we go home to sleep," argued Francis.

"They have the same passion and dreams, but they are in need of assistance," she added.