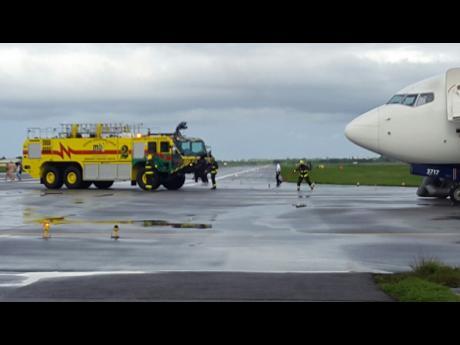 In this October 12 file photo, emergency vehicles are parked near Delta flight 304 on which a fire broke out in the cargo hold at the Sangster Airport.

Jamaican authorities say their investigation into Monday's fire on a plane, which forced the temporary closure of the Sangster International Airport in St James, is still ongoing.

Public relations officer at the Jamaica Fire Brigade, Emeleo Ebanks, declined to provide details on how far the probe has advanced.

Investigators from the fire brigade and the Jamaica Civil Aviation Authority's Flight Safety Division are involved in the probe.

Meanwhile, commercial director of MBJ Airports Limited, Sitara Byfield, says the Delta Air Lines Boeing 737-800 left Jamaica for the US yesterday without any passenger onboard.

The plane was about to take off for Atlanta, Georgia, in the US minutes after three o'clock on Monday afternoon, when fire broke out in the cargo section.

Delta says the 160 passengers and six crew members who were on board were safely evacuated and there were no reports of injuries.