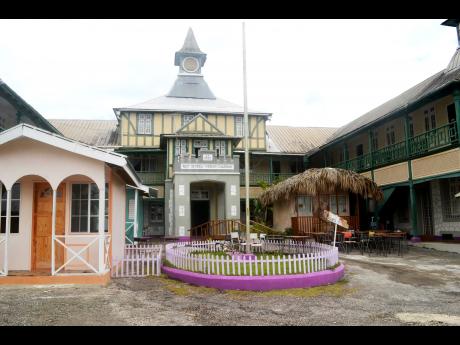 File
The St. Hilda’s High School. Its board says its investigation revealed that a series of miscommunication and misunderstandings occurred between all parties concerned.

The Board of St Hilda’s Diocesan High School for Girls has reinstated Jade Bascoe as Head Girl.

In a statement today, the Board said it convened a meeting yesterday to review the recent decision to rescind her appointment.

It notes that the review was in response to requests from the Education Ministry and the Office of the Public Defender, and in a desire to continue to uphold the ethos and tradition which have characterised the institution and the Office of Head Girl.

The Board said yesterday’s meeting was attended by the principal, the Permanent Secretary in the Ministry of Education and its regional director. According to the Board, discussions were held with Jade and her mother Rhonda Clarke, both of whom indicated that they would welcome the student’s reinstatement to the position of Head Girl.

However, they expressed the willingness to accept whatever decision the school board reached.

The St. Hilda’s board says its investigation revealed that a series of miscommunication and misunderstandings occurred between all parties concerned, and that there was no attempt to discriminate, harm or embarrass the student, or to bring the name of the school into disrepute.

The board says it is satisfied that, by Jade’s own affirmation in the presence of her mother, she is prepared to fulfil the duties of a Head Girl as prescribed in the school’s Handbook.

It says Jade assured the board that she would be willing and able to carry out her functions as a Head Girl of the school if she was reinstated.

Meanwhile, the Education Ministry has welcomed the decision of the St Hilda’s board to reinstate the head girl.

The Ministry says it is satisfied that the issues concerning all parties were adequately ventilated.

Permanent Secretary Foster-Allen said the incident at St Hilda’s High has pointed to the need for the Ministry to draft some simple guidelines for schools regarding the issue of faith being a criterion for holding office in student governance.

She noted that this was important to preserve the constitutional rights of individuals as highlighted by the Public Defender.

The guidelines should reflect the Education Regulations and best practices in schools.