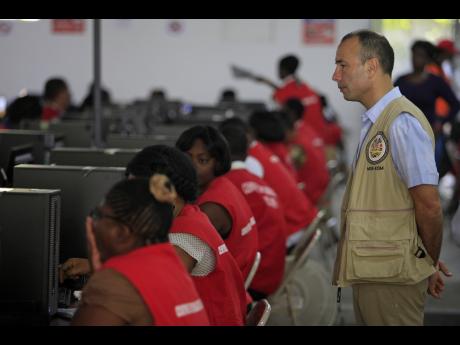 The Electoral Observation Mission of the Organization of American States (OAS/EOM) to Haiti is urging all political parties as well as the electorate “to patiently await” the outcome of Sunday’s legislative and presidential elections.

At least 53 candidates were seeking to replace President Michel Martelly as head of state in the first round of the president election, while voters also cast ballots to elect members to the legislature.

The OAS/EOM said while it was aware of the obstacles and challenges leading up to and during Sunday’s poll, “Haitian citizens with the will to vote were able to cast their ballot.

“Isolated incidents of violence occurred on polling day. However, they did not affect the overall course of the election. The Mission urges all actors of the electoral process to act responsibly in the coming days,” the OAS/EOM said, urging all political parties and the electorate to patiently await the tabulation and pronouncement of the official results by the Provisional Electoral Council (CEP).

Members of the European Union Election Observation Mission observe electoral workers count ballots at a polling station at the end of the general elections, in Port-au-Prince, Haiti on Sunday. - AP Photo

A CEP spokesman Richardson Dumel said the preliminary results of the legislative and presidential elections could be issued within 10 days,

The OAS/EOM said that the electoral and security officials had done much to ensure a “significant improvement” on the first round of legislative elections on August 9 when the polling was marred by acts of violence, intimidation and the burning of several polling stations.

The Director General of the National Police of Haiti (PNH), Godson Orelus, told a news conference on Sunday night that police had made 234 arrests and seized 13 firearms and four vehicles during Sunday’s voting.

In addition, he said, a policeman carrying ballots in his private vehicle, in the constituency of Cite Soleil, had been arrested an placed in isolation.

The OAS/EOM said that it would “remain in place until the final results are tallied.

“OAS observers will be present at the tally center 24 hours a day during the tabulation process and until the results of the presidential election are announced,” it added.