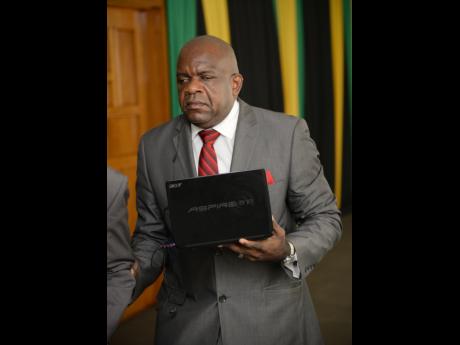 Jermaine Barnaby Photos
President of the Senate, Floyd Morris makes his way to a press conference at Gordon House today with a laptop. Morris released video footage which appeared to contradict claims by opposition Senator Marlene Malahoo Forte that she was in the restroom at the time he asked her to furnish a letter.

President of the Senate, Floyd Morris, this morning released video footage which appeared to contradict claims by opposition Senator Marlene Malahoo Forte that she was in the restroom at the time he asked her to furnish a letter.

At a press conference this morning, Morris instructed Marshall to the Houses of Parliament, Kevin Williams, to show the footage of a security camera.

The video showed what appeared to be Malahoo Forte inside the lunchroom of parliament.

The Senate President said he had no other option but to suspend Malahoo Forte, who he said disrespected the Senate and disobeyed his instruction.

Morris said her conduct amounted to contempt and warranted suspension.

The Senate president says he has no reason to apologise to the opposition senator because he acted in accordance with the  Standing Orders. Meanwhile, he said Malahoo Forte could send a copy of the disputed letter by email to him and a copy to the Clerk to the Houses of Parliament following which the suspension will be lifted.

He suspended the opposition senator last week after she did not furnish a letter supporting her claims that the Judicial Committee of the Privy Council had expressed an interest in travelling to Jamaica to hear cases.