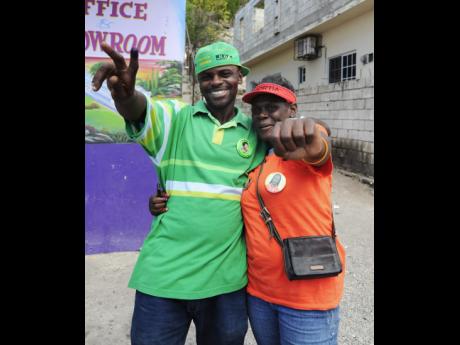 The two major political parties are this evening back in the trenches as they prepare to contest Jamaica's 17th general elections.

A date is still to be announced by Prime Minister Portia Simpson Miller, however, both the ruling Peoples' National Party (PNP) and the Jamaica Labour Party (JLP) are revving up their on-the-ground campaigning with more mass rallies this week in St Ann and St Catherine.

Supporters of the JLP are gathering in Alexandria in south west St Ann, the constituency currently represented by the  Peoples' National Party's (PNP) Keith Walford.

The party's message to the constituency will be led by its leader Andrew Holness and the campaign chairman, Mike Henry, the MP for central Clarendon.

PNP President and Prime Minister Portia Simpson Miller will lead today's meeting of the ruling party in Independence City, Portmore in the east central St Catherine constituency represented by Arnaldo Brown. The meeting is scheduled to get under way at 5p.m. at the Dermason Plaza.

The race to form the next government is tight, with the last polls showing both the JLP and PNP in a statistical tie.

The JLP enjoys 26 per cent of voter support and the PNP 27 per cent, according to the latest Bill Johnson polls. However, the PNP at this time has the advantage, having gained 12 percentage points in October when compared to the last poll in October last year.