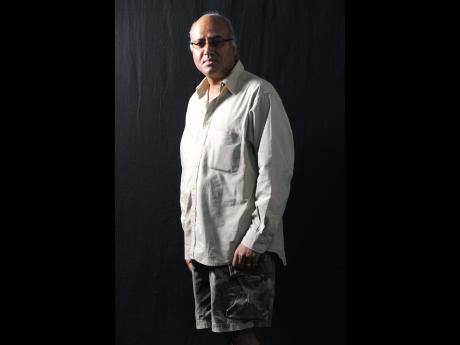 Ricardo Makyn
The Gleaner's Christopher Serju dressed in a pants made from camouflage similar to the one seized from him by a Customs officer in Trinidad. 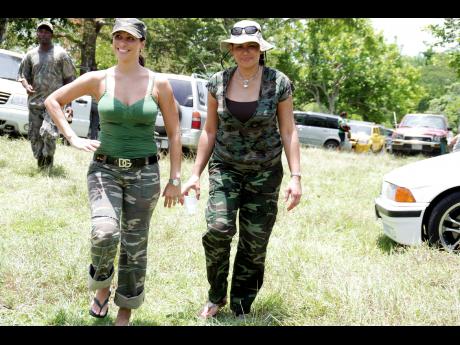 File
Tina Chin (left) and Nadine Rigg would not be allowed to dress like this in Trinidad where the camouflage material is banned.
1
2

"They camouflage," Customs officer Morrison Smith calmly replied, handing me a flyer issued by the Customs and Excise Division of the Ministry of Finance.

The one-page document sparingly explains that under the laws of the twin-island republic, use of the camouflage pattern material in any item of clothing or dress, caps/hats, bags, or even short shorts is prohibited.

I was fascinated and flabbergasted to realise that this prohibition is not restricted to the green mix/match long worn as a combat outfit by soldiers across the globe, but also pink, black and white, or yellow, white and black combinations.

By then I realised that I would have no choice but to surrender my pants to Customs, officer Smith, who was gracious enough to allow me the opportunity to go into an unused room to change my clothing.

Of course this meant allowing me to take along all my luggage into the cramped storage room, where he pointed out a number of other camouflage items, which had been confiscated. Realising that the pair of pants I quickly found was a green-coloured version of same styling as the one I was about to give up, I stepped out and asked if it would be allowed.

After consulting with a supervisor, my friendly Customs officer gave the okay. Of course, as I looked around at the number of confiscated camouflage items, I thought about all the innocents who had lost their property and put themselves also at risk of a court fine.

I picked up my camera, mindful that the flash might be detected, and took a picture in the cramped quarters. A quick review showed that the picture was overexposed, and I immediately snapped another, which passed muster.

I then came out and waited for Customs officer Smith, who had seemed taken aback when I asked in advance for a receipt as evidence that my pants had been commandeered by the Trinidadian authorities.

At my insistence, he consulted with a supervisor, and they spent an inordinate length of time filling out the simple form, which advised that my comfortable, old, faded camouflage pants were now state property. "Prohibited under legal notice" was the stated explanation on the form.

Even though I miss my pants dearly and still don't understand why they were taken, despite Smith's explanation that it was "because of the crime situation", in Trinidad, I presume, I appreciate and applaud his professionalism.

As I stood in line, he signalled to me, at which point I left my large suitcase and he asked that I take along everything with me. Throughout the entire exercise, he was very pleasant and never loud or rude at any time.

In fact, the reason I am really upset with the Trinidad authorities is that the delay contributed to my late check-in, which left no time to catch any of the Diwali celebrations or to buy a curried goat roti, which I had anticipated eating all day. The combination of a public holiday and persistent rains put paid to enjoying that culinary delight, after which I had been panting all day. But that's all right, since I am planning to return for carnival camouflaged in a three-piece suit, dress shoes, and fedora. I know they won't recognise me.