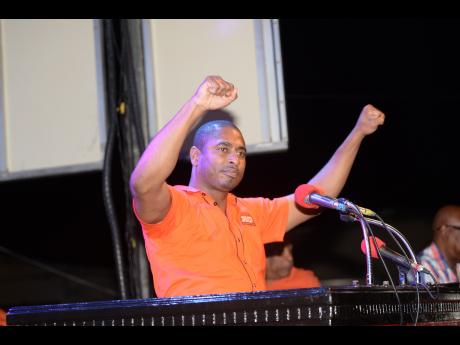 Jermaine Barnaby
By beating Dr Christopher Tufton by 13 votes for the seat in 2011, Hugh Buchanan (in photo) made a better political start than his late father, who was hammered in his first parliamentary contest in 1980.

There are two constituencies in St Elizabeth that the Jamaica Labour Party (JLP) believes it must win in order to remove the People's National Party (PNP) from the Government in the next general election.

But the Members of Parliament for those constituencies — Hugh Buchanan in South West and Richard Parchment in South East — speaking at a PNP rally in Black River on Sunday, said the JLP should forget about those seats.

Despite one speaker having quipped that Floyd Green — Buchanan's challenger in South West St Elizabeth — is so fragile that he wears the tag "handle with care" the incumbent has promised to beat him and chase him out of town.

"When Donald Buchanan was the Member of Parliament for South West St Elizabeth him get the one Labourite to beat every time. Now as I beat dem, dem run," Hugh said.

He beat the JLP's Derrick Sangster in four consecutive elections from 1989 to 2002.

By beating Dr Christopher Tufton by 13 votes for the seat in 2011, Hugh Buchanan made a better political start than his late father, who was hammered in his first parliamentary contest in 1980. In that election, Derrick Sangster polled 8,555 votes to beat Donald Buchanan who got 5,535.

Despite ominous predictions that he will lose to Green, Buchanan told supporters not to worry because throughout his life he has always been the dark horse.

"What is important to me is that you believe we will be standing firm in the second term with Hugh Buchanan as your Member of Parliament.

"I will not tell them that I am David that slew Goliath," he said in reference to his win over Tufton who was at the time a high profile cabinet minister. The younger Buchanan was not the only one talking big Sunday night.

"Danny Buck held it for four terms and Tufton couldn't hold on for a full term," Luther said. Meanwhile, Parchment, who won by 970 votes said South East St Elizabeth is firmly behind the PNP.