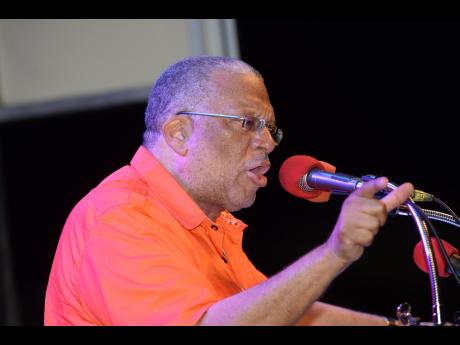 The people of the breadbasket parish of St Elizabeth are being told to expect lands to be distributed to them should the People's National Party (PNP) be re-elected to office.

Dr Peter Phillips, the campaign director for the PNP, served up the promise while in Black River, South West St Elizabeth, for a mass rally.

"The mission of the next term has at its centre a new deal for agriculture. More land titling, more irrigation, more land distribution, more opportunities to feed ourselves from our own resources, putting Jamaican people to work," Phillips said.

He told party supporters that the Government would be expanding the current agro parks initiative, which will not only cut the food import bill, but also create jobs for Jamaicans.

"We have planned and are ready to move: 21 new agro-parks, including here in St Elizabeth; new ones at Hounslow, New River, Little Park," said Phillips, who is also the minister of finance.

The Ministry of Agriculture is slated to spend more than $418 million this fiscal year to continue work on existing agro-parks and establish new facilities. This is in addition to $718 million spent over the past two years to develop the nine agro-parks currently in operation.

An agro-park is an intensive, contiguous, parcel of land for agricultural development.

In April, Agriculture Minister Derrick Kellier said that there were plans to extend the Hounslow irrigation system and construct farm roads to complement the packing house and the pepper mash facility to make the facility.

The minister also said there were plans to install an irrigation system at Spring Ground to put 200 acres of land under production.

Phillips did not indicate whether Flagaman, a major farming area, would get an agro-park.

He, however, said that the venture was "one of the great accomplishments in this term", stating that "we have been able to reduce the food import bill by $5 billion".

"We stop put foreign farmers to work and getting local Jamaican farmers producing the food that we eat," the PNP campaign manager said.

He said there would be more employment in the agricultural sector as demand grew for goods such as peppers, ground provision, and fresh food for the hotels and the school-feeding programme.