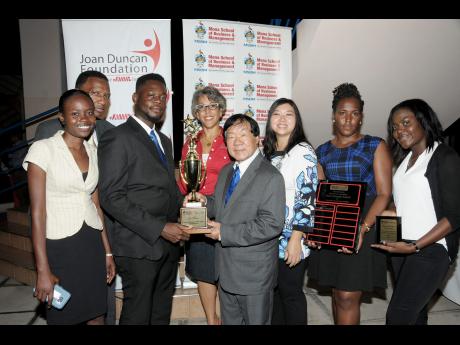 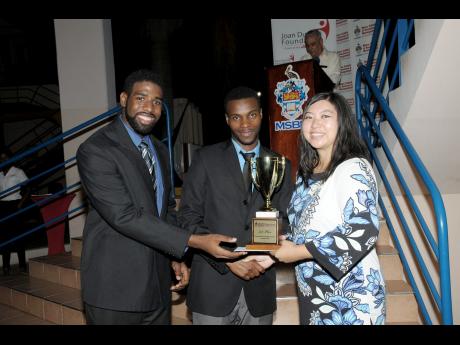 Budding entrepreneurs Jordan Freeman, Aneishka Christie and Samantha Williams walked away with the top prize in the Vincent HoSang - UWI Venture Competition for their business plan for the manufacturing and sale of Jamaican iced coffee products.

The team, named Glace Kafe, was presented with the award at a recently held ceremony at the Mona School of Business and Management which followed the final judging of the competition.

The trio topped six other finalists, claiming the top prize and cash award of $350,000 and a one-year support from the Mona School Support Services Incubator, which includes office space, administrative support and/or consultancy.

Glace Kafe also won the award for the Most Corporate Socially Responsible Business Model. This special award is presented by main sponsor Joan Duncan Foundation, the philanthropic arm of the JMMB Group, in a bid to promote responsible corporate citizenship among entrepreneurs. The team was also awarded the sectional prize for Best Financials.

Freeman credited the team's success for the strong and dedicated support of their mentor Karen Davis, a member of the 2014 winning team.

"She gave valuable insight from her personal experience and shared her business acumen in developing the business plan. Her support played a key role in helping the team to gain a better understanding of the business world, which was valuable for us as we primarily have a science background," Freeman said.

Freeman indicated that the team is excited about winning and is actively seeking investors, even as it builds awareness of its brand. Glace Kafe has four flavours of ice coffee which have been introduced in the local market in selected supermarkets in Kingston and St Andrew.

Carlton Barrows and Nikolai Lutas of team Phyto-BioFoods claimed the second-place prize, while the third-place trophy went to Rabb-Eats with Alicia Williams and Jessica Tyghter, whose business plan was centred on the livestock farming of domestic rabbits for their meat and by-products.

Philanthropist Vincent HoSang told the entrants, "As entrepreneurs, it is always important to listen to your customers as they are the ones who will buy your product. It is important to be dynamic, making the necessary changes to one's products and introduce technology in order to remain competitive and relevant," HoSang noted.

He said that at Caribbean Food Delights they continuously introduce new technologies to meet the growing demands of thousands of patties per week from large supermarkets and retail outlets. The philanthropist used the occasion to encourage the finalists to give back to their communities and to contribute to their home country in the future with the growth of their businesses.