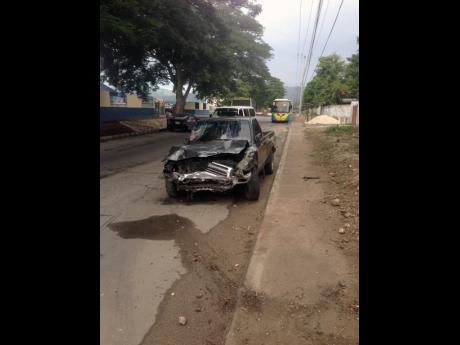 Contributed
The grey Toyota pickup truck that ran into the wall. The owner Erick Martin who allegedly fled the scene, later acknowledged he was the driver when confronted by police. 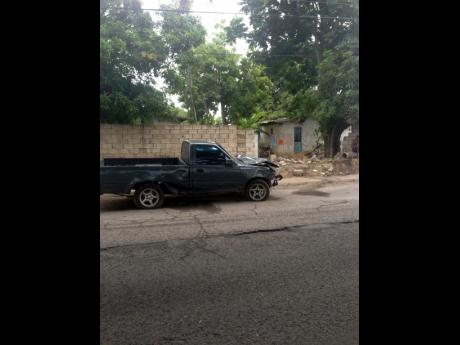 Contributed
The section of wall damaged. 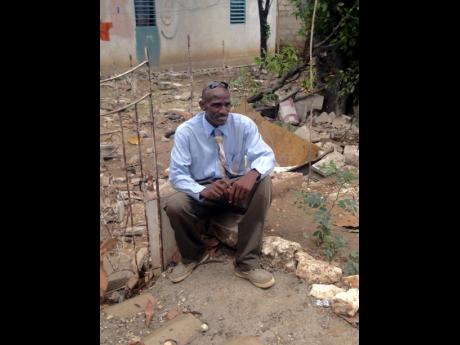 Ruddy Mathison
Evangelist John Martin sitting at the exact spot he would have been if he was not out on God's business.
1
2
3

Evangelist John Martin a Seventh-day Adventist minister residing in Meadowsvale in Gregory Park, Portmore, is rejoicing, after acknowledging that if it was not for doing the work of God, he could very well be seriously injured or killed.

Evangelist Martin told Family & Religion that a grey Toyota pickup truck, allegedly driven by an under-aged driver lost control while travelling along the Gregory Park main road in the vicinity of the Cedar Grove Academy, and crashed into his back wall causing considerable damage to his property.

"God have me for a purpose, because if I was not out evangelising, I would be sitting at this very area at that very time looking at the vehicles go by," Evangelist Martin said, demonstrating where along the fence he would be sitting.

"The driver did not stop, he alighted the vehicle and ran. This is the third time vehicles left the road and hit my wall down," he added.

The Seventh-day Adventist minister was quick to point out that motorists using that section of the road exercise little or no regard for the safety of other road users and people's property.

"Many accidents happen along this stretch of road and something must be done about it. Repairs to the damaged wall will cost thousands of dollars," according to Evangelist Martin.

Meanwhile, the Gregory Park police located the owner of the pickup truck who has since made since made arrangements to repair the damaged wall.