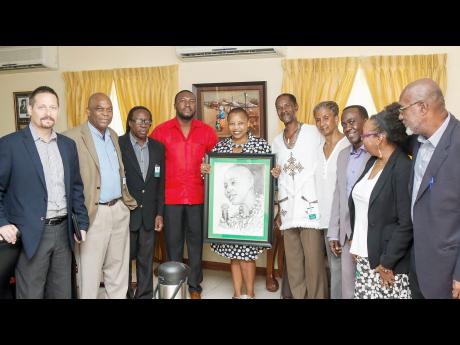 Members of the Jamaica South Africa Friendship Association executive at the presentation of a farewell gift to South Africa's outgoing High Commissioner Mathu Joyini (with portrait) when they met with her on December 1, to bid her farewell.

Representatives of the Jamaica South Africa Friendship Association (JASAFA) last week said their farewell to South African High Commissioner to Jamaica Mathu Joyini, who will be ending her five-year tenure in the island on December 19.

The group presented Joyini, with a portrait done by artist Patrick Kitson from photograph by Dacx Productions, a team of young digital media specialists.

In response, Joyini said she was pleased with the renewed relations and active presence of JASAFA.

She said one of the high points of her tenure in Jamaica was the commission's ability to attract the high-level visits to Jamaica, including visits by the President Jacob Zuma.

According to the outgoing high commissioner, officials from her country have had discussions with Jamaican officials on one of the most important elements of science and technology, the provision of water which is scarce in South Africa.

She said it is critical that Jamaica continues to educate young people on the role Jamaica played in the history of South Africa with the fight in bringing down apartheid.

"Our relations with Jamaica through associations like JASAFA is the continuation of human rights that have helped to connect us and to keep us together as friends," said Joyini.

In his response, president of JASAFA, Dennis Wright, said he was very pleased with the renewed and active relations between the association and the high commission.

He said Joyini was leaving behind a very rich legacy based on the work done by the embassy here in Jamaica and the Caribbean.

According to Wright, since he took over as president, the association had built a good working relationship with the high commission.

He added that his recent visit to South Africa to attend the Moshito Music Conference and exhibition in Johannesburg had opened the doors for a number of business projects.

JASAFA plans to establish media links with the South Africa Broadcasting Corporation, and he has engaged DSTV, the biggest cable network through the continent, with a view of getting a channel going to filter information from the Caribbean about Africa.