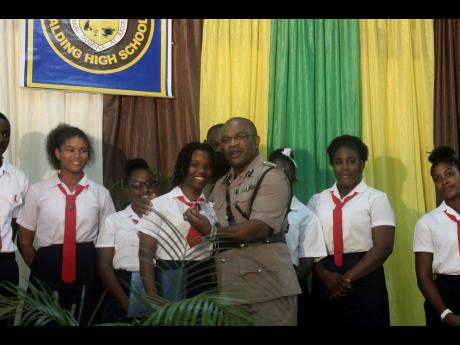 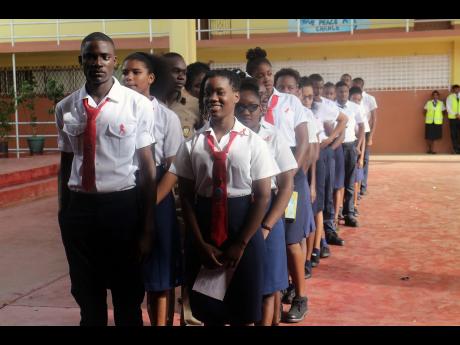 Tamara Bailey
Members of the first Police Youth Club to be established in a high school - Spalding High School in Clarendon.
1
2

The club, initially started by Corporal Steve Hepburn with 30 members, now boasts 60, and according to Dean of Discipline Yvonne McLeod-Myrie, it will seek to not only improve discipline on campus, but also to improve the overall development of the students.

"This launch will allow us to get more help from the Jamaica Constabulary Force (JCF), with planning camps for students with behavioural problems and increase the presence of police personnel who come to give motivational speeches. The onus is on us to help make the lives of children better. Club members must be disciplined, they are to act as safety monitors who make reports and they give back to the community. We currently assist the Mustard Seed Community and the New Vision Children's Home."

Principal George Henry made a request to education officers to facilitate the cooperation of all schools in the region to establish their own police youth clubs so as to fix some of the maladaptive behaviours of the students.

"If we had more police youth clubs in high schools, I am sure that communities would feel better. Many students are, from time to time, associated with some form of crime, so this is a very important move that we are making."

Senior Superintendent Dezita Taylor encouraged the members to, "learn all you can especially leadership skills, be disciplined, your self-confidence will be built through the interactions you will have with members of the JCF and others to whom you will be exposed as members of this club."

Guest speaker, Bishop Dr Gary Welsh, not only inspired attendees, but committed to changing the current uniform of the club thereby making it as close as possible to that of the uniform of the JCF.