Press governments to do more on human rights - EU representative 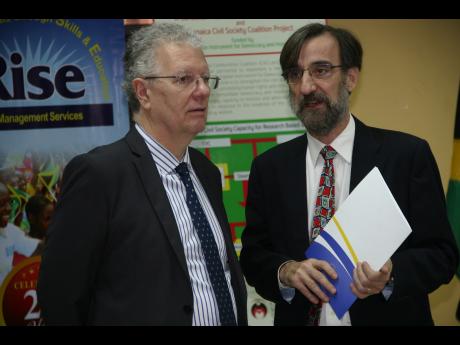 Christopher Serju
Jean-Michel Despax (left), French ambassador to Jamaica, seems to be contemplating the words of Jesús Orus Baguena, head of cooperation, European Union Delegation to Jamaica, during yesterday’s launch of the European Instrument for Democracy and Human Rights, at the Faculty of Law, University of the West Indies, Mona Campus.

Sixty-five years after the Universal Declaration of Human Rights was adopted by the United Nations (UN), declaring, among other things, that "everyone is entitled to the same human rights without discrimination of any kind", the realisation of that objective is still some way off from being realised, according to Jesus Orus Baguena, the head of cooperation, delegation of the European Union to Jamaica.

"Since that time, so many advances for the rights of the society as a whole have been addressed. But we stand here today because there is still so much work left to be done, especially for the vulnerable," Baguena declared on Thursday.

"And that's one thing all of us - and I mean all of us - have to remind our respective governments sometimes. Because it is they who have signed, so they should keep their word. And it is not like some people think - that it is that the rights only for the vulnerable - but the rights are for everybody. It is just that the vulnerable need more help," he said at the project launch of the European Instrument for Democracy and Human Rights, at the Faculty of Law, University of the West Indies, Mona Campus.

The event was timed for December 10, observed as International Human Rights Day, the 65th anniversary of the UN signing in 1948, when it was agreed that human rights are universal, indivisible, interconnected and interrelated.

The European Union is built on the protection of fundamental values, which it seeks to advance in the wider world. These are democracy, the rule of law, the universality and indivisibility of human right and fundamental freedoms, respect for human dignity, and equality, according to Baguena.

"All of these, I believe, are values that are shared with Jamaica, as well as the majority of countries that have signed on to various treaties regarding human rights. It is with this frame of mind that we gather today to gain insight into the current progressive steps being taken by three projects funded by the European Union here in Jamaica. Each of these projects is different in their own respects, but all seek to deliver effectively in their specific mandates to uplift the standard of human rights here in Jamaica, in particular, those most vulnerable."

The three local agencies in charge of the project to which the EU diplomat referred are Stand up for Jamaica, Rise Life Management Services, and Caribbean Vulnerable Communities Coalition.

Stand up For Jamaica has been using the €146,736 contribution to facilitate the rehabilitation and reintegration of former inmates into society. This has involved the training of inmates as well as correctional officers in the island's penal institutions in technical skills. It also seeks to strengthen medical and psychological services for inmates and wards of the State. The project runs two years.

Through Finding my Voice, a national training programme, Rise Life Management Services has been working to empower children to protect themselves and prevent sexual abuse. Over the 18-month duration of the project it will seek to, among other things, increase awareness and reporting of sexual abuse through media campaigns, regional symposiums, and community involvement. To this, it has received €299,792 in funding.

For Caribbean Vulnerable Communities Coalition, the plan is to use its €300,000 grant funding to improve civil society capacity for research-based advocacy over two years. During this time, it will conduct research and collect data on activities to enhance and inform evidence-based advocacy. This is projected to improve civil society organisations' capacity to document and advocate against human rights violations, and promote gender equality.

Baguena reminded his audience that the important aspect of the initiatives is that they are all designed to help civil society become an effective force for political reform and defence of human rights.