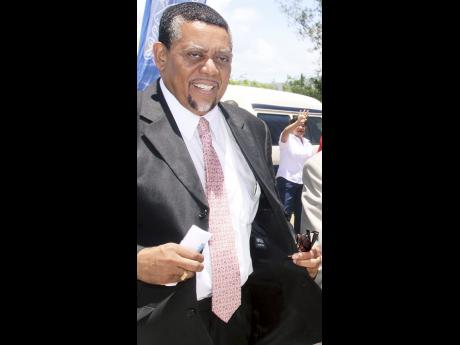 Having switched allegiance to the People's National Party (PNP), Laurie Broderick, a former junior minister in the Jamaica Labour Party (JLP) administrations led by Bruce Golding and Andrew Holness between 2007 and 2011, has argued that the Portia Simpson Miller administration deserves a second chance.

According to Broderick, the JLP does not have a grasp of what the country needs now.

"They (the PNP) deserve to be given that opportunity because they were bold enough to take on the ticklish and troublesome issues," Broderick, the former member of parliament for North Clarendon, told The Sunday Gleaner late last week.

Broderick, in the 2007 general election, delivered a shocking 227-vote win over Horace Dalley, taking the seat for the Labour Party. But in the 2011 general election, Dalley, who had previously served unbroken from 1989, returned to beat Broderick by 1,705 votes.

The former Labourite joked that his relationship with Dalley now is like that of Joe Frazier and Muhammad Ali, two heavy weight boxers who became friends after their bout.

Broderick is now a member of Dalley's campaign team which is seeking to deliver victory for the PNP over the JLP's Caswell Pinnock.

"I have switched allegiance to the People's National Party because I think it is a retrograde step right at this time of our history to be moving positions vis-a-vis relationship with the IMF and other issues.

"Furthermore, politics is not a spectator sport. You like to be in the arena; and frankly speaking, I don't think enough respect was there for me in the Labour party. I am not a man who can sit down in the gallery all day," Broderick told The Sunday Gleaner.

He has been welcomed into the fold by Dalley, who told our news team that Broderick is "a great son of the hills of Clarendon", who the PNP is happy to have.

Laurie Broderick's father, Percival Broderick, was a member of the PNP and served as MP from 1949 to 1955 in North East Clarendon. His brother, also named Percival, represented the JLP and was MP for North Central Clarendon between 1972 to 1989.

Laurie Broderick, a former army captain, followed his brother into the Labour Party, but told The Sunday Gleaner that he was a democratic socialist at heart.

"The only mistake that the PNP made was that they didn't stay the course," he said of Michael Manley's brand of socialism.

"I like (former JLP leader and Prime Minister) Eddie Seaga ... , but he had a mission to drive Jamaica forward in a particular way, and you could feel it. Both parties lost their way, but you go to a young PNP supporter, and they can tell you what they stand for.

In a thinly veiled jab at Andrew Holness, the leader of the JLP, Broderick said that unlike PNP President Portia Simpson Miller, who consults and delegates, he leads with an iron fist.

"Change is not embraced through the thoughts of one man through a 10-point plan," Broderick said.

"Plans come and plans go. Show it to me in the Labour Party. It is not there. To get people marching in one direction and embracing struggle to achieve an objective takes more than rolling out and dusting off a plan," Broderick added.

He said that based on the way the PNP Government has implemented the International Monetary Fund (IMF) - backed economic reform programme, it is clear that the PNP knows what it is about.

"We are looking at a difficult year ahead. Only a party that can hold the imagination of the people is going to have a smooth ride ... . At least, in the PNP, you know the direction they are going. You know it is the IMF path, and you know what to expect. With the other guys, you had better blindfold yourself and walk the plank."

The former state minister said the way in which the administration he was a part of dealt with the Manatt-Dudus affair left a bitter taste in his mouth.

According to Broderick, that was made worse by the way the JLP fell short when it came to implementing the economic-reform programme negotiated in 2010.

"There are certain times that people have to stand up and take a blow, and I didn't see that out of Bruce Golding, and certainly, the new crown prince is a little too much for me," he said.

Broderick said that he is grateful for the opportunity he got to serve the country through the JLP, and declared that he was not pushed out of the party, as he was even asked to return and contest a set for the party.