Some soldiers to vote Thursday 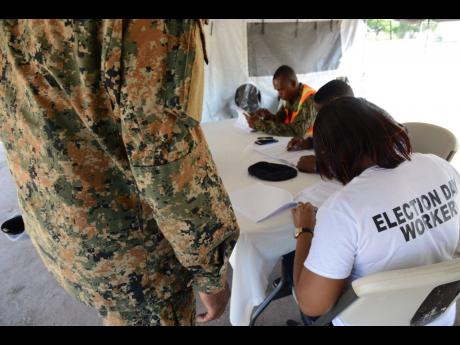 The Jamaica Defence Force (JDF) has directed its commanding officers at military bases across the island to make arrangements for some members of the army to vote on Thursday.

The disclosure came after several members of the JDF were unable to vote at the army's Up Park Camp headquarters, in St Andrew.

More than 39,000 Election Day workers and members of the security forces are down to cast their ballots today, three days ahead of the Thursday's General Election.

Speaking to The Gleaner/Power106 News Centre today, Major Smalling explained that the names of some JDF personnel were not on the Voters' List at Up Park Camp because they were transferred from the military bases where they were registered.

However, he said they will be allowed to vote on Thursday and that their commanding officers will make arrangements to ensure this happens.

Despite this, a steady stream of military personnel has been casting ballots at the 14 polling stations established at Up Park Camp.

At the Jamaica Constabulary Force's Mobile Reserve Division at Harman Barracks voting has been going smoothly all morning, with only a few of police personnel complaining about not seeing their names on the Voters' List.