The joy of kite season 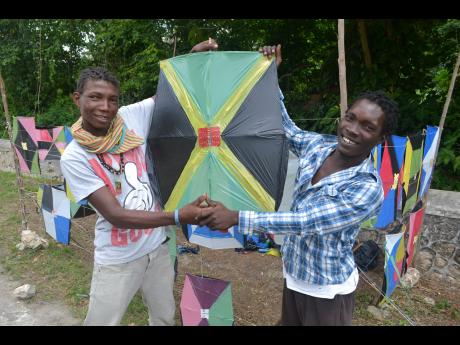 Wagner Lawrence (left) and Gavin Blake show off some of their products.

It's Easter time and kites are flying all over Jamaica, taking second place only to bun and cheese in popularity during this season. In St Ann, two of the island's major kite festivals take place over the Easter weekend, the Melrose in Claremont and the International in Priory.

Outside of the merriment, the season offers kite makers an opportunity to earn an income for the few weeks that it lasts and temporary stalls have sprung up along the roadways in St Ann, offering kites for sale.

One such kite maker is Wagner 'Tomey' Lawrence and his assistant, Gavin Blake. The Gleaner caught up with them on the roadway at Roaring River (between Dunn's River and Mammee Bay) last week Tuesday as they tried to sell a few more kites in the days leading up to the festivals.

Tomey says he has been making kites since he was a little boy and although those on display at the time were small, and range in prices between $500 and $1,500, he says he makes much bigger ones.

"All yesterday (Monday) mi mek one big like you and sell it fi bout $4,000 same way. Whole heap a kite mi mek, in all kind a pattern, star, moon, Jamaica flag. Every pattern yu can tink of we can build same way," he points out.

Although he has been making kites for years, it has been three years now that he has been selling from the location.

"Yuh know seh business a pick up doh, because every day mi come a road, mi caa eat a likkle food, so mi haffi give thanks same way."

But both men lament the short season during which kites are traditionally flown and say they would like to sell kites outside of the traditional Easter period.

"The kite season start from bout early March or sometime late February, depend on when Easter come," Blake said.