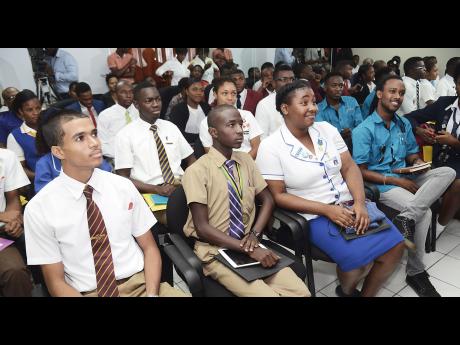 Ricardo Makyn
Youth leaders from across the island at a forum hosted by the then Ministry of Youth.

Eighty-six per cent of young Jamaicans believe persons in their age group (14 to 40) have faced some form of discrimination in Jamaica despite the island's motto, 'Out of Many, One People'.

That's the finding of a just-concluded mobile youth survey conducted by Respect Jamaica in association with the local office of UNICEF.

According to those who responded in the survey, the major areas of discrimination were class (68%), sexual orientation (59%), disabilities (57%), and political affiliation.

"The class bias in Jamaica is very palpable," said children's advocate Betty Ann Blaine as she responded to the findings of the survey.

"In my 32 years of working with children in Jamaica, and youths, particularly those from poor communities, I have seen the most blatant examples of the class bias. The young people see it, they live it and they feel it in the most basic ways.

"A young man from the inner-city community of Grants Pen in St Andrew once told me, 'Ms Blaine, you know that racism is a real thing in Jamaica. When we go in certain stores they racially profile us and the security stalk we like them think we a must thief', so I know the reality of the class bias that the children live," added Blaine.

The children's advocate, who started the mentorship programme Youths Opportunity Unlimited some 25 years ago, argued that more than 40 per cent of Jamaica's children live below the poverty line and they are the ones who are most often the victims of class discrimination.

The survey also found that while some respondents identified gender, religion and race as areas where discrimination is practised, these areas were not major issues.

These findings were not surprising to social worker Gloria Merdith who heads the western Jamaica-based non-governmental organisation Children of Faith.

"From I was small I have seen the discrimination against children and it is painful because I don't like abuse," said Merdith.

"I have seen children facing discrimination because of their disabilities, particularly something like autism, which is something we don't understand," added Merdith as she pointed to several cases of discrimination faced by children in the St James-based inner-city community where she calls home.

"Sexual orientation leads to the worst form of discrimination in Jamaica, and it is related to the lack of parenting skills where parents cannot guide their children," said Meredith.

For human-rights advocate Jaevion Nelson, the issue of discrimination is a real problem in Jamaica, which governments over the years have failed to take concrete measures to address.

"Every day when people step out of their homes they have to prepare themselves to deal with people discriminating against them. People experience discrimination on a daily basis at school, work, church, in our communities, on the bus, in the supermarket, restaurants, social and entertainment spaces.

"If you listen to some of the reasons why students, or young people, in their communities end up in a fight, someone saying something discriminatory about them, their parents, siblings, or friend is quite often the problem," Nelson told The Sunday Gleaner.

"In my experience, people - young people especially - are commonly discriminated against on these grounds, sometimes more than one, actually. Like a gay man who is young and from a poor family or a poor black woman from rural Jamaica.

"Classism is rife in Jamaica and is not being dealt with. We see the impact of class privileges, for example, play out in our education system, one's ability to find and retain work, and just how we treat each other on a daily basis," added Nelson.

According to the human-rights advocate, he is surprised that race is not higher on the list when it comes to discrimination since it is so closely related to class in Jamaica.

"Discrimination is a pervasive issue in our society which continues to hinder our ability to engender a safer and more cohesive society, as set out in Vision 2030.

"Unfortunately, we aren't doing enough to tackle this grave issue despite its impact on people across the country. We don't talk about it enough and when we do, we aren't honest enough about it," said Nelson.

He argued that Jamaicans are not paying enough attention to this challenge which is ruining the lives of many Jamaicans and limiting their ability to realise their dreams.

"The Government must take some responsibility and see this as an important issue that it must address," said Nelson.

The Respect Jamaica/UNICEF survey was conducted between February 29 and March 3, using the Digicel customer base in Jamaica, with 3,024 respondents with more females than males responding.