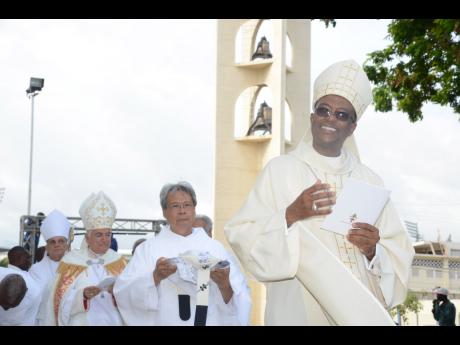 Kenneth Richards at his installation at the Holy Trinity Cathedral on July 7. 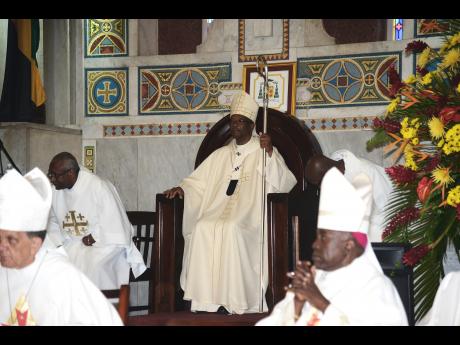 Gladstone Taylor Photo
Kenneth Richards (centre) at his installation at the Holy Trinity Cathedral on July 7. 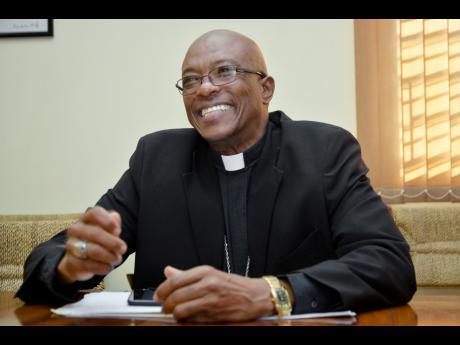 File
Richards, a graduate of the St Catherine High School, was installed at the Holy Trinity Cathedral on Tuesday, 31 years after he was ordained into the priesthood.
1
2
3

Kenneth Richards has been installed as the seventh Roman Catholic Archbishop of Kingston.

Richards, a graduate of the St Catherine High School, was installed at the Holy Trinity Cathedral on Tuesday, 31 years after he was ordained into the priesthood.

Archbishop Richards moved to Antigua in 2012 when he was appointed Bishop of St John’s – Basseterre, and only recently returned to Jamaica.

READ: A man of the people - Archbishop-elect to take on new role armed with vast experience

He is elated to return home at this time and is determined to make a significant contribution to the development of the nation.

“I would like to see a paradigm shift with respect to how we address the challenges we face as church and nation. We need this paradigm shift so that we can ameliorate and transform the society we live in. We need a society that is more wholesome and conducive to our well being and to the advancement of our nation,” Archbishop Richards stated. Taking over leadership during the Catholic Church’s celebration of the Jubilee of Mercy, Archbishop Richards is also expected to address strategies to make the church a more welcoming, merciful and modern spiritual home.

“We, the church, have a role to play in creating this paradigm shift. It’s very simple to do, we just need to apply faith to how we analyze and interpret the world we live in. We often yield to the wounded human side of our being which is influenced by our temporal conditions and secularism. We respond from that point of view rather than applying the perspective of - what does God say and command about that situation? If we live our lives according to the status quo then we have not actualized that we are persons of faith,” said Archbishop Richards.